Riders can now use Citi Bikes in Jersey City 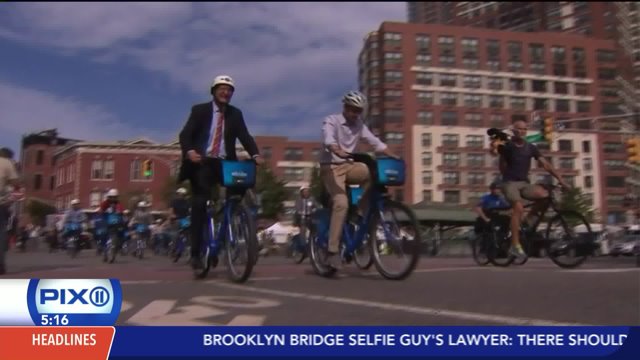 JERSEY CITY, N.J. — Officials cut the ribbon for an expansion of Citibike today, welcoming 350 new Citibikes to the roads across the river. As of Monday, the bikes are available for rent at 35 locations across the Jersey City. You can pay $9.95 for the day, $25 for the week or $149 for an annual membership.

"Ride to the path train, ride to the ferry. Leave your bike right there. When you get off on the other side, take another bike,” explained the Jay Walder, CEO and President of Motivate, the company behind the bike-share program.

Jersey City is expected to see high demand, as 600 residents already use Citibike in New York. Mayor Steven Fulop, an avid bicyclist, welcomed the program with open arms and even brought his own helmet.

“I can safely say that none of us standing here were alive when the last regional transportation system was launched here in Jersey City,” said Fulop.

Bike JC, an organization that advocates for the integration of more bikes onto Jersey City's streets, took the new rentals out for a test ride.

"They’re great,” said Bike JC board member Patrick Conlon, "There is actually 2 designs of these and JC got the new design which is really nice because the gearing is a little bit better. That was a big complaint on the early design - is you’re peddling and peddling and not getting anywhere. So the gearing has been changed so you can actually moved around a little bit quicker now.”