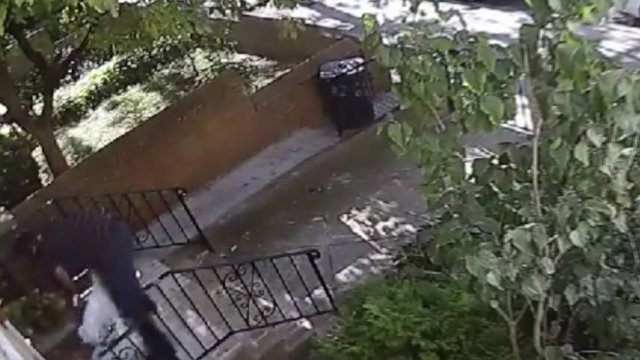 ASTORIA, Queens — An alleged thief was caught on camera as he stole two packages from an Astoria home this past Friday.

“I came home and my husband said, I’ve got some video to show you,” Cecelia Leon told PIX11 News.

On video the man appears to be talking on his cell phone as he approached Leon’s doorstep where two packages were recently delivered.

“He opened the storm door picked up the packages, put it in his bag, he had a large bag with him that he was putting stuff in,” Leon said. “He was very at ease doing this he seemed to have no anxiety about what he was doing.”

According to Leon, one package contained a bathing suit, the other had a book inside.

“He opened the packages but he kept the bathing suit but he threw away the book .”

“There are some people on Facebook that have been communicating with me about thefts that they had, and they notice the same thing, a guy walking down the street with a bag.”

After reporting the theft to police, Leon says she received a phone call late Monday evening from a detective with the 114th police precinct who said they recently made an arrest in the case.