‘Times Square Commons’ could be solution to aggressive costumed characters 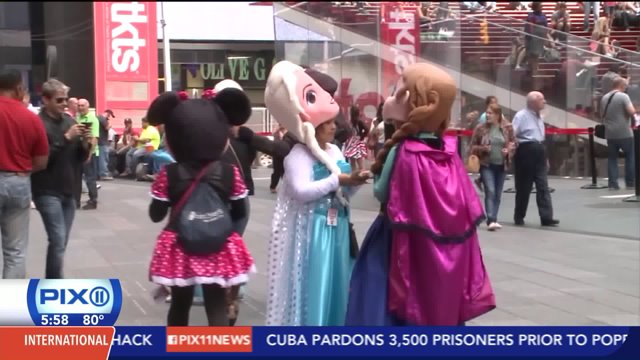 Many characters in Times Square aggressively seek out tips for photographs. Some like it but many people do not.

According to Manhattan Borough President Gail Brewer, "We have to balance what I don't like, which is the aggressive panhandling with the first amendment."

"We think it's a simple solution to a complicated problem. It creates special zones where there is still creative speech and freedom of expression but it's not a free for all," Times Square Alliance President Tim Tomkins said.

In a Daily News Op-Ed, they suggested the city redefine the plazas into 3 distinct areas. The characters and painted ladies would be in an activity zone. People would need to seek them out.

There would be civic zones for tables, chairs and events. And there would be flow zones for people walking through the area. The goal is to ease pedestrian traffic.

"I think that's better because it will allow you to decide whether you want to go and take a picture with Elmo," New Yorker Tyrell Chambers said.

Tourist Luvy Sharp agreed. "I think that's a very good idea. Not everyone is up to seeing all that so early in the morning."

The Mayor's office recently formed a task force to look at ways to address the aggressive panhandling. In response to this new proposal a spokesperson said, "The Mayor's task force is considering a range of ideas and proposals, including the ones cited in the op-ed. We will have more to say after the task force presents its recommendations."

PIX11 News tried to talk to various characters and painted ladies Friday about this new proposal. All said "no comment."