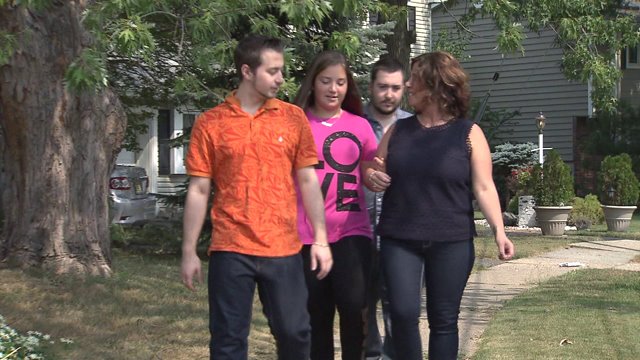 PIX11`s Ellyn Marks sits down with the Pullis family as they get ready for another new chapter in their lives. But the pain from losing their husband and dad still lingers.

HAZLET, N.J.–– Melissa Pullis and her three children are slowly settling into their new home in Hazlet, New Jersey.

A future that looks especially bright considering such a painful past.

"That day my husband woke up, he went to work, I kissed him like I normally did," Melissa remembered. "He said, 'Happy Birthday!' and that was it. I never heard from him again.”

Eddie Pullis was killed in the attacks on the World Trade Center.

He was a consultant for Aon Corporation, working on the 101st floor of the South Tower.

“Around this time every year, I just become numb,” Melissa said.

A day, typically filled with celebration, became the worst day of Melissa's life.

“I forget that it’s my birthday."

The days and weeks that followed were unbearable as this grieving mom struggled to find a way to tell her kids.

“I told them he was on a business trip," she said. "But finally I had to tell my kid that there was an accident, that daddy was gone.”

Over the years, twins Anthony and Eddie Jr, who were just seven years old at the time, dealt with the loss very differently.

“I don’t like talking about it that much," Eddie Pullis Jr. said. "I just want to forget it."

Eddie Pullis and his two sons on a summer vacation in Puerto Rico just a few weeks before 9/11.

But they both like to remember the good times.

“I remember that day like it was yesterday," Anthony smiled. "I remember being in the sand.”

“I got a new bike, and he would teach me how to ride” "even though I was bleeding, my knee was scraped up, Daddy I got this”

Maria, who was only 17 months, got to know her dad through pictures and stories.

"He was so funny, loving and caring,” Maria said.

Each family member has their own way of feeling connected.

“I feel closer to him with it on,” Anthony said as he showed us his gold ring.

“I really enjoy it," Eddie added as he showed us his gold bracelet. "I know it’s his and he wore it all the time.”

“He's always with me, his initials and the tower," Melissa said as he pointed to a small tattoo on the inside of her left wrist. "I'll never get over losing him."

But Melissa has been able to open her heart again. She recently got engaged to a longtime friend.

“He’s wonderful, he lost his wife to cancer so he understands loss,” she described.

“We’re all together," Maria said. "We just have a bond with that.”

As they reach for and accomplish their goals, Eddie is always in their thoughts.

"I’d like to work in NYC and make buildings stronger, for him," Eddie Jr. said. "And make sure they won’t come down.”

"I just want to live and be happy and be the best mom possible," Melissa smiled. "And I think I've succeeded."