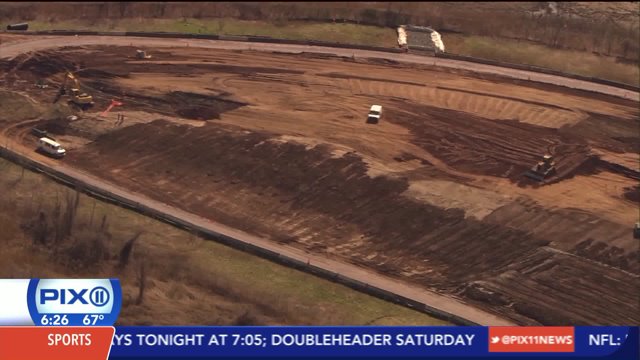 Over the course of three decades, the much maligned former trash heap will be transformed into parkland that will be three times the size of Central Park.  But there’s more than just trash buried under those hills, 9/11 debris was also trucked and barged here after the attacks.

"It was like therapy for me," Marra said. "There were things that happened there that I didn’t even want to think about."

Marra, from the Brooklyn south gang unit, was now overseeing the many cars that were recovered from the base of the two towers, and working with families looking to recover whatever they could.

"We got a call that mom was going to be bringing her two children," Marra said. "She simply went to back door and put two children in back. She took 8 x 11 photo out of bag and put it on the seat facing the steering wheel."

Frank, a father of two, says the family took time to reminisce, then wanted to see what was in the trunk.

"We went around the back and popped the trunk and there were birthday gifts in there with balloons," Marra said. "She closed the trunk right away. My daughter’s birthday was a couple of days after 9/11. He must have had t the gifts here"

The authors interviewed many fellow officers for their stories. Their first interview unearthed a question about a woman both had seen at the site. This woman appeared to be dressed as an old time red cross worker, trying to serve coffee and sandwiches.

"She’s got a tray, and there’s items on the tray, and I look away, and look back and then she’s gone," Marra recalled. "Years later I believed she was a spirit, an apparition. And a reader from Wisconsin added another layer to the mystery Red Cross Worker. She said the Red Cross worker was a soul collector who was there not for the living but the dead. It was very intense."

Marra, and thousands of other officers, toiled for more than a million and half hours to recover some 4,000 remains.  Still today, 1,100 families have never gotten anything  of their loved ones.

"We consider to be a cemetery without tombstones," Abbate said. "It’s sad to think those peoples’ remains are just sitting on a landfill and not a place where they can be remembered."

The newly re-branded Fresh Kills Park has plans for everything from soccer fields to playgrounds, bike paths to boating, golf courses to beaches.

No city official would comment on camera about a memorial though.

NYC Parks, in charge of the site, would only say “a memorial is being considered for that site but it’s too early to draft designs, as it is still in the process of being capped.  We anticipate the capping process to be complete in approximately three years.”

Maria has already started a letter writing campaign, as a middle school teacher, she wants to involve students too.