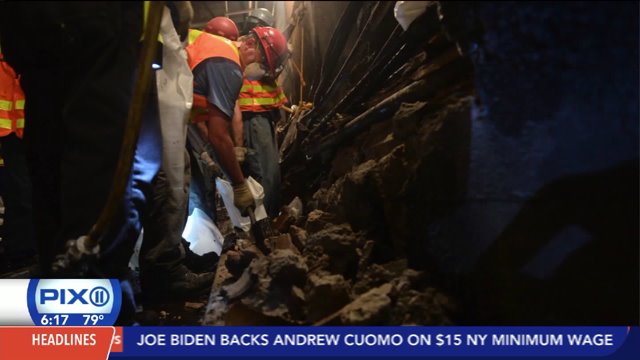 BROOKLYN — After a train derailed Thursday night injuring three people, normal service is back on the G.

MTA says the train that derailed near the Hoyt-Schermerhorn station in Brooklyn was re-railed early Friday morning. Limited service due to repairs were expected to last throughout the weekend as repairs were made; however it was restored by 4:30 p.m. Friday afternoon.

The incident happened at 10:34 p.m. Thursday when a southbound G train derailed about 700 feet from the Brooklyn station, according to the MTA. They said the front two wheels on the first car came off the track when it came in contact with a bench wall next to the track. About 80 passengers were on the train. Rescue crews led them through the tunnel to the station.

Some train crews and union representatives say they have expressed concerns about this area in the past.

The MTA is still investigating how the wall got in the path of the train, and plans to share the findings once the investigation is complete. The MTA has apologized for the incident:

"Make no mistake: The Metropolitan Transportation Authority is fully responsible for the safe and reliable operation of the New York region’s mass transit system, and an incident of this magnitude is unacceptable."

The MTA has called attention to the fact they have asked the city for $3.2 billion, but was offered only $657 million to rebuild and repair the MTA system.

TWU Local 100, which represents transit workers, called on the City of New York to contribute more to the system.

The New York City Mayor's office issued a statement saying "The State is responsible for the State-run MTA. The City stands ready and willing to have a comprehensive conversation on the future of this vital State authority, and we look forward to understanding where the promised State funding will come from.”