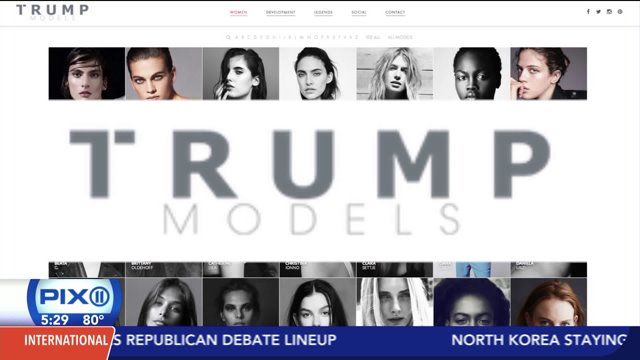 NEW YORK -- He's grabbed the political spotlight with his many provocative positions, including controversial statements about immigration.

But now Donald Trump is himself the focus of a very different immigration story.

It involves high fashion foreign models his company apparently helped to bring into the U.S. and then, according to someone who worked with Trump's agency, he deprived them of money and opportunity.

The two main players in this story are one that's not so well known, Alexia Palmer, a fashion model, and one perhaps known all too well, Donald Trump, who's, well, The Donald.

But the front-running Republican presidential candidate has an immigration issue of his own, and it involves Palmer, the model.

"Everything about modeling," she says in a resume video of her work, posted on YouTube. "I just love it!"

The video predates her involvement with Trump's company. Called Trump Model Management, it's the agency for which Palmer came to the U.S., legally, from her native Jamaica to model for Vogue and other high-end fashion outlets.

According to her, Trump signed a contract with her for $75,000 a year for three years, in 2011. She ended up receiving a fraction of that, after other expenses were deducted by Trump, such as makeup, catwalk modeling lessons and mandatory limousine rides. She ended up being paid $3,380, even though she did more than 20 modeling projects with Trump's agency.

Gehi and Palmer, his client, are suing Trump for the more than $220,000 they say his company still owes Palmer, after she came to the U.S. under the sponsorship of Trump Model Mangement.

Also, Trump has far more models than Palmer at his agency. Gehi told PIX11 News that his client is not the only immigrant to whom Trump made promises and didn't keep them.

"She did not get her salary for three years," Gehi said. "There are likely other members who are in the same class." He was referring to a class action lawsuit he has filed in Palmer's behalf, and to which he expects other models to sign on.

But the lawyer for Trump Model Management, Larry Rosen, told PIX11 News in a phone interview that the case "completely lacks merit" because Palmer is not an employee of The Trump Organization.

Rosen said that Palmer has "signed two separate agreements" saying that she is not a Trump employee, but is instead an independent contractor, for whom Trump Model Management only provided representation.

Trump's attorney also said that the issue is not about immigration. "He cannot confuse a written contract claim with the immigration process," Rosen said about Palmer's attorney. "One has nothing to do with the other." Trump's attorneys have asked a judge to dismiss the case.

That request has been pending before a civil court for six months now. Both sides await the judge's decision.