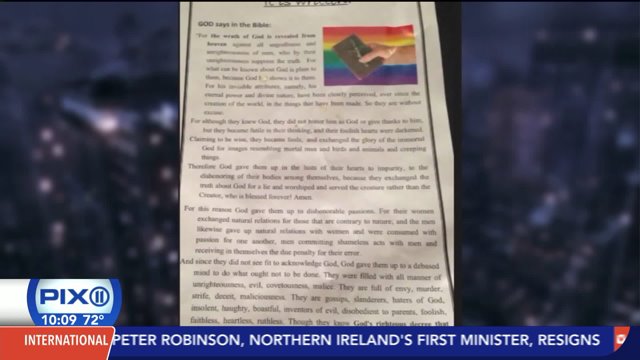 JACKSON HEIGHTS, Queens––All New Yorkers, no matter their sexual orientation, have been able to legally marry since 2011, four years before the U.S. Supreme Court ruled that it's a universal right nationwide.

This New York City neighborhood has had its own annual gay pride parade for nearly a quarter century, and it elected an openly and proudly gay man to represent it in the City Council in 2009.

Noting those facts, it's evident why some people in this community are disturbed by what was printed on a flier and left on dozens of cars here last weekend.

"This flier," said local City Councilmember Daniel Dromm, a Democrat, "called for people to die."  He said that it was both offensive, since it was gays specifically who the flier said "deserve to die," and disturbing as well.

Specifically, the flier made many religious references, and quoted the English Standard Version of the Bible's book of Romans, Chapter 1, verses 18 through 32, which discusses a variety of sins.

The flier quotes a passage that refers to what the apostle Paul calls "lusts of their heart," which includes homosexuality.  The passage goes on to read, "those who practice such things deserve to die."

That phrase in particular, placed on other people's property, was what some local residents found particularly disturbing.

Andrès Duque tweeted about the fliers, one of which he'd found on the sidewalk.

"As someone who lived in Jackson Heights for more than 15 years," he told PIX11 in a direct message, "I can say that as diverse as the neighborhood is, it is also incredibly welcoming to the gay community that make the neighborhood a home. These flyers are in no way representative of the neighborhood and I’d be willing to bet they came from individuals who do not live in the neighborhood."

He said that he's now moved out of Jackson Heights, but is a frequent visitor, and saw the flier over the weekend.

"While the language might be vile," he told PIX11 News, "I saw it more as an anomaly than a credible threat."

Council Member Dromm had stronger words for whoever is behind the fliers.  They're "obviously cowards," he said, and he praised the car owners who had brought the fliers to his attention and to the attention of police.

"They're not gay," he said about the whistleblowers, and he called on anyone with any information to let police know.  Apparently, if somebody knowingly placed this material on the vehicle of someone who is gay, it may be pursued as a hate crime.

"Any information will help find who's doing this," said Dromm.  He said that he was working with the NYPD on this situation.