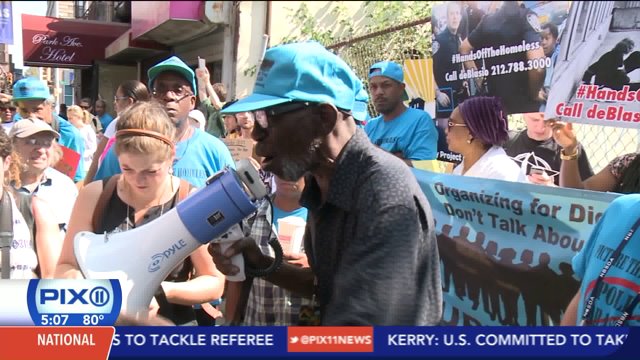 NEW YORK — The homeless are not voiceless.

That point was made abundantly clear Wednesday as several dozen homeless men and women chanted and marched in East Harlem.

This rally was not just about raising awareness to the issue of homelessness, but addressing what they say is a grown problem; their treatment at the hands of police officers.

"You gonna put them in all the homeless shelters and tell them, you can't sit here, you cant go to sleep here on this bench," one homeless man yelled through a bullhorn. "Or you gotta get up. And you gonna have the police used as a unit to evict people off the street, and that's wrong."

"I was unfortunate enough to be part of the family system, as well as being the single person out here homeless. It's a hard life," said Enoch.

He's been homeless and doesn't envy someone living on today's streets.

"Years ago when we were homeless, there were less folks in the system, so there seemed to be more services available," said Enoch.

Even as the NYPD cracks down on homeless encampments, Mayor Bill de Blasio has described them as an example of "disorder."

Enoch says today's homeless men, women and children are often shooed away from one location to the next because they have nowhere else to go.

"Some folks have been in the system for so long, that its almost a give-up mentality, and let me go on my own," said Enoch.

The mayor has recently changed his tune regarding homelessness in the city, acknowledging that it's a reality. He added that it's a decades old reality that started long before his administration.

Regardless of who's to blame, there's no getting around the sight of men and women sleeping on the city's streets.

The mayor says he's committed $1-billion over the next four years to fight homelessness.