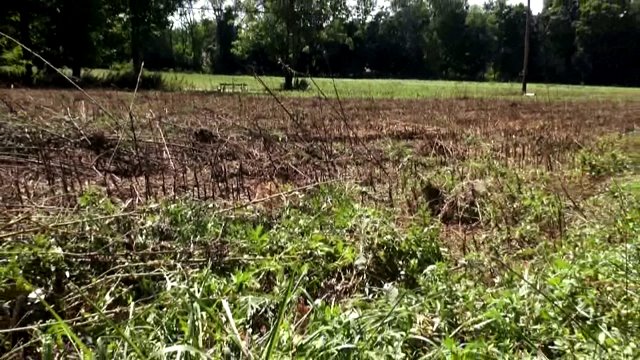 It’s putting growers and landscapers in a pinch and squeezing municipal water supplies.

The bad tomatoes can be blamed on the dry weather that’s been hanging over our area since spring.

It has farmers throughout the region working double duty to keep their crops from drying out.

Some have had to cut back on how much they grow because frankly, they don’t have the time to provide extra water to them all.

“Right now people would be planting lettuce and peas for the fall," said Donna Dorsey, owner of Goffle Brook Farm. "Unfortunately, it’s going to be a season that we’re not going to be able to.. might not be able to plant those things.”

Meanwhile in the suburbs many lawns are yellowing as towns step up water restrictions. Officials are serving summonses if you are caught over watering your lawn.

Sprinklers have been banned in some towns.

In Ridgewood, conditions have been deemed “critical.”  Residents are only allowed to water their lawn by hand twice a week.

‘We haven’t had an extended drought like this in many many years," said Dorsey.

Dorsey’s family has been in the business of growing and selling local produce for three generations. She estimated that it’s been 20 years since there’s been a drought this bad.

Landscapers are also impacted. Dorsey says a friend of hers is taking a big hit because “people are not getting their regular lawn cuts every week.”

So what will work best for your doorstep or garden in these dry conditions? Dorsey recommends these flowers for fall: Pansies, Rudbeckia, Hydrangeas, Snap Dragons and the Vinca flower she says is especially drought resistant.