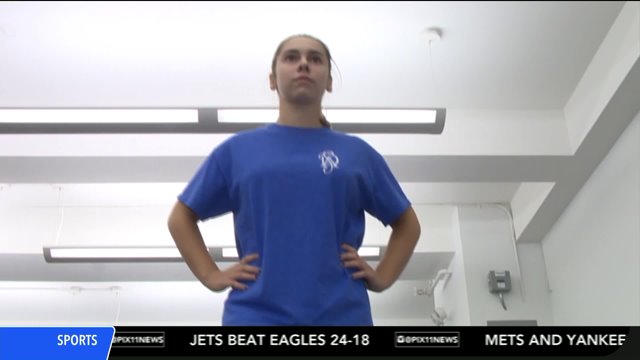 MANHATTAN –– Fifteen-year-old Kathryn Moody is like any other teenager. The sophomore at St. Dominic's in New Jersey is preparing for the upcoming school year and the sport she loves best, soccer.

But it wasn't all fun lat year for this 5 foot 3 inches tall forward who plays on the high school soccer team. She faced her biggest opponent yet, a concussion. She is one of an estimated 300,000 high school athletes who suffered a head injury last year.

"I was running and the goalie came out and knocked me over and feel on my head," Moody said. "I felt OK and normal."

But she wasn't normal when she got home.

"I felt really bad, my head hurt and I felt like I wanted to vomit," Moody said. "I wanted to crawl into a hole."

Her mother Susan was very concerned and watched her daughter very closely.

"She couldn't even get out of bed," Susan said."I was getting worried."

"The young brain is not fully mature like a 21-year-old adult," Lager said. "We rehab these young athletes until they are fully recovered."

Dr. Lager uses an interactive treatment called "The Trazer," Kathryn is demonstrating the seven step series of games and drill testing her visual balance and cognitive skills before and after a head injury. An athlete will only be released when his or her post concussion score is equal to their initial baseline score they registered before their head injury."

"We use this 'Trazer' plus a written cognitive test to all athletes," Lager said.

The dangers of concussions have been exposed more so these days with the recent released of the movie trailer "Concussion." A true story on neuropathologist Bennet Omalu played by actor Will Smith. Omalu discovered chronic traumatic encephalopathy or CTE in the brains of two NFL players who later committed suicide. Because of this Susan Moody has been researching the issue even more closely these days.

"The cases of NFL players worries me," Susan said."Concussions affect your memory and things like that. And if my daughter gets another concussion, we may have to look into maybe not playing soccer anymore."

For now, Kathryn is preparing for the first game of the season next week. She hopes student athletes will learn from her experience. She hopes to one day to play college soccer.