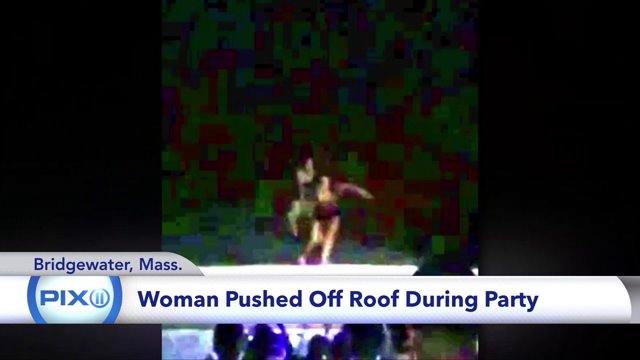 BRIDGEWATER, Mass. – Cellphones came out when a woman climbed onto a roof at a party Sunday night in Bridgeport, Massachusetts -- and now prosecutors are using that footage after a man allegedly pushed the woman off as cameras recorded.

As some people in the crowd started to chant "Jump!" the man appears to walk up behind her and push the woman from behind.

The 20-year-old tumbled from the 10-foot garage roof onto partygoers below, but only suffered bruises, according to WHDH.  She is a student at the university, according to police.

The shove happened after police had already arrived to break up the rowdy gathering of roughly 200, many from nearby Bridgewater State University.

Police say it's unclear why the man, identified as Alexander Marquez, 20, of Springfield, allegedly thrust her over the edge.  He told officers he climbed up in an effort to pump the crowd, the station reported.

The school is also conducting its own investigation into the video.