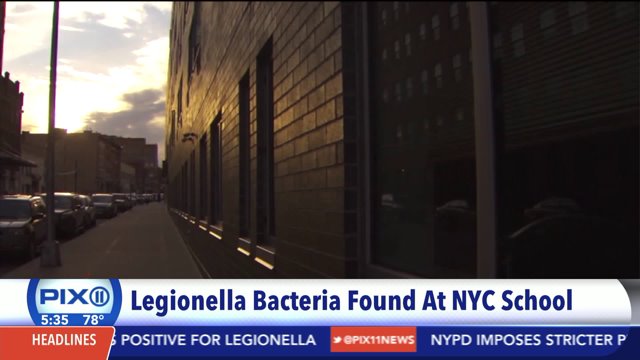 UPPER EAST SIDE, Manhattan — A Manhattan school has been closed for cleaning after a test of its cooling towers revealed the presence of bacteria that causes Legionnaires' disease, a sometimes deadly form of pneumonia that was the subject of a fatal outbreak in the Bronx, officials said.

Bacteria was found at Convent of the Sacred Heart School, located on 1 East 91st St. The campus of the private Catholic girls' school was shuttered Tuesday for students and open for faculty meetings only.

Principal Joseph Ciancaglini said the cooling system was disinfected twice by an environmental engineering firm. He said classes at the all-girls school will begin next week as scheduled.

The discovery came when the cooling tower was tested as a result of new legislation requiring all building owners check for the bacteria in their towers. That law was inspired by a Legionnaires' outbreak in the South Bronx that killed a dozen people and sickened more than 100.

Ciancaglini sent faculty members at the Convent of the Sacred Heart School a letter explaining the situation.

"While it was only found in small amounts and is unlikely to have infected anyone, we have closed the mansions this weekend to eradicate the bacteria. The cooling system will be disinfected twice over the weekend, supervised by an environmental engineering firm that is skilled in dealing with this bacteria."

In a statement, the Department of Health said that the school took the appropriate steps to disinfect the tower, and that the positive test result shows the importance of recent Legionnaires' legislation.

"The Convent of the Sacred Heart School properly disinfected its cooling tower. Its cooling tower's positive test result, and subsequent disinfection, underscores the importance of the new legislation the Mayor signed just two weeks ago," the department said.