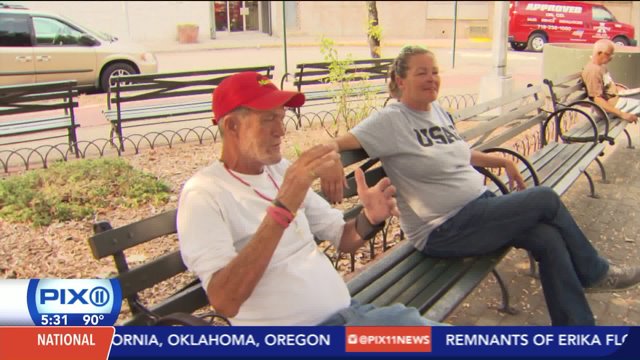 At a time when 311 complaint calls about the homeless are up 60 percent, and even off duty police officers post pictures of the people they see sleeping on the streets—homeless couple, Chris and Tammy defy the stereotypes.

“I’m homeless my wife is homeless and what we do is we clean up the park,” Chris said.

For two and a half years the couple has slept on this small median in Bay Ridge Brooklyn. They nicknamed it ‘Paradise Park.’

“We’re keeping it clean in many ways,” Tammy said.

Neighborhood residents say Chris and Tammy did what politicians and even the police never could—made this park more family friendly than times square.

“We kicked the hookers out and drug dealers. I just kicked another drug dealer out this morning. I beat him up twice before on a tree,” Tammy said.

They even have their own set of rules.

“Number one , you ain’t staying , number you ain’t hooking out here, number three there ain’t no drug dealing, and four if you give me any s*** I will mess you’re a** up,” Tammy said.

The husband and wife drifted to Brooklyn after loosing their jobs in Pennsylvania. They`ve developed a real life here - friends and a routine.

They get by with help from a soup kitchen, and a local shelter. They take pride in their little slice of Brooklyn - but there’s one thing they’d like to change

“As far as Mayor de Blasio I’m not liking him because he does not help the homeless people.