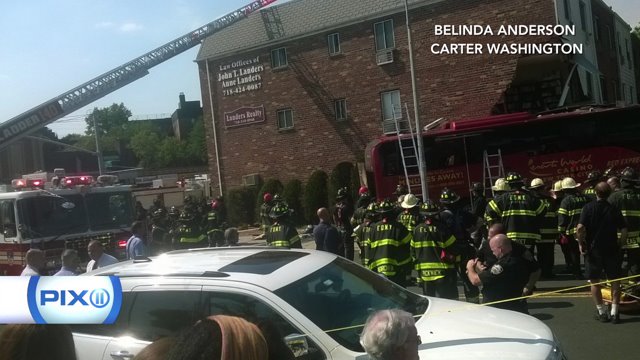 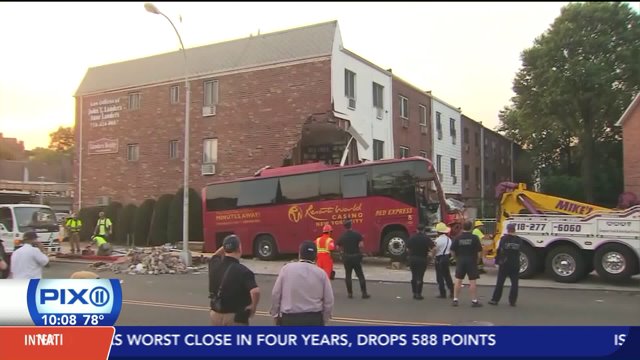 REGO PARK, Queens —A bus driver was reportedly cut off by another vehicle that caused  the bus to crash into a building in Queens Monday afternoon.

The crash happened at the intersection of Woodhaven Boulevard and 63rd Avenue in Rego Park Monday afternoon.

Both the bus driver and the driver of the second vehicle were issued summons. The bus driver was issued the summons for making an illegal U-turn and crashing into a Queens building.

A witness told PIX11 the bus driver was pinned inside and people could be seen climbing out of the vehicle.

EMS reported the bus driver in critical condition was transported to Jamaica Hospital, and is expected to survive.  Part of the second floor collapsed, leaving the driver pinned under loose brick, according to the FDNY.

Six people were hurt in total. They  were taken to the hospital.

The crash tore off a large section of the building, exposing a bookshelf inside one of the rooms on the second floor of the three floor building.

In a statement from Resorts World Casino NYC, the company said:

“Our thoughts and prayers are with those impacted by today’s bus accident. We are cooperating fully with the authorities in the investigation.”

National Express made a similar statement, while adding they are conducting their own investigation.

Police and other emergency responders are currently at the scene, along with NYPD Collision Squad. The Department of Buildings responded to the scene to make sure the building was secure enough to remove the bus.