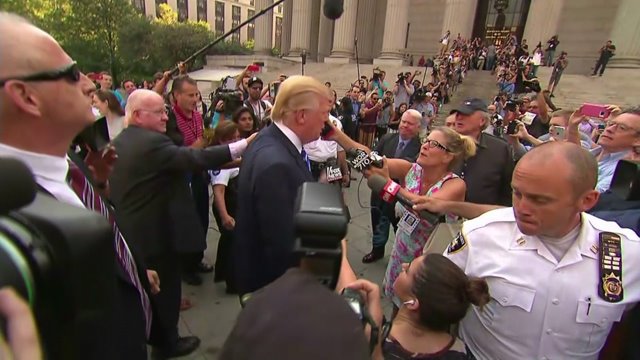 MANHATTAN -- Republican Presidential hopeful Donald Trump arrived to court on Monday, not for his controversial statements, but to report for jury duty.

Supporters and naysayers camped outside of the Manhattan courtroom to watch the bombastic real estate mogul come to serve his civic duty, according to CNN. A Trump spokesperson confirmed that he will be leaving his campaign trail and show up for jury duty. If Trump didn't show up, he would have to pay $250 fine.

He was already facing a fine for the last five times he missed his jury duty summons. Trump's Special Counsel Michael Cohen said Trump missed these summons because the mail was being sent to the wrong address. The fines are now dropped because he showed up to his Monday summons.

The entrepreneur turned politician is still at the top of the Fox News poll and is winning support from one in four of primary voters, even after his contentious comments, CNN reported. Just last week after the first GOP debate, Trump made a comment saying Fox News host and Debate Moderator Megyn Kelly "had blood coming out of her wherever" during the debate. Trump has come out saying people had a "it was a ridiculous interpretation" of what he said and meant.

A comment that wasn't misinterpreted -- his first immigration statement about Hispanics. Since then, the Trump has rolled out a six-page immigration proposal that calls for a end to birthright citizenship and requires Mexico to fund a wall between the U.S.-Mexico border.