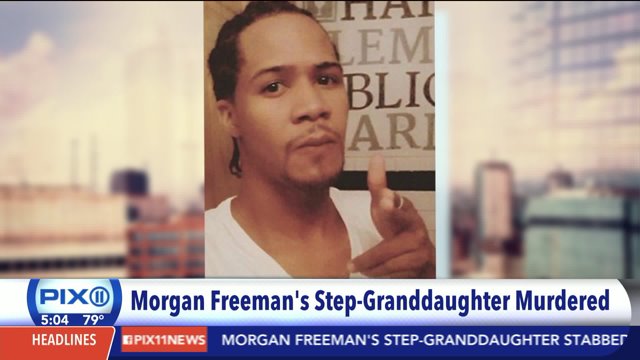 Davenport, 30, faces a second-degree murder charge in her death. Police said he was brought to their precinct as an "emotionally disturbed person" and he underwent psychiatric testing before that charge was filed.

"I heard two screeches and I looked out my window," neighbor George Hudacko told PIX11 News. "I heard him mumbling 'God' and 'Jesus,' and his hand was moving up and down."

Hudacko is still having a tough time comprehending what he said he saw about 3 a.m. Sunday as he peered out his third-floor window at 450 West 162nd St.

He now knows it was his neighbor, Hines, being stabbed in the middle of the street, allegedly by her live-in boyfriend who kept saying "get the demons out."

When police arrived,  Hines, who lived just a few doors away, was lying in the street with multiple stab wounds. She was pronounced dead at a hospital.

"I heard it was her boyfriend," neighbor Adrienne Evans said. "She lived with him."

The victim was the step-granddaughter of actor Morgan Freeman. Her grandmother was Freeman's first wife.

"The world will never know her artistry and talent and how much she had to offer," Freeman said in a statement.

Hines made a movie with Freeman called "Five Flights Up," which also starred Diane Keaton. Besides "Five Flights Up," Hines appeared in "Moll Flanders" and had reportedly just finished filming "Landing Up", which is scheduled for release next year.

"My heart goes out to them," Hudacko said, almost breaking down in tears.