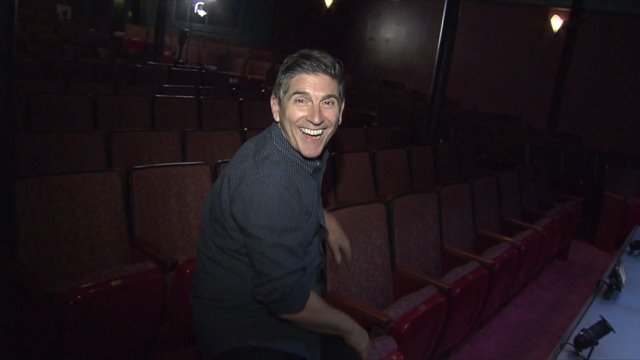 In this week`s Backstage on Broadway, PIX11 talks with James Lecesne about his new one-man show "The Absolute Brightness of Leonard Pelkey" and how the Trevor Project is helping LGBTQ youth.

“When I was growing up, to be homosexual was a sin, a crime and a mental illness,” James Lecesne said.

Piercing words heard all too often.

“As a kid, how do you grow up into the world with that kind of message coming at you,” he said.

James Lecesne found a way, but for so many the pressure becomes too much.

“It made me crazy that there was this epidemic of suicide," he remembered.

So he penned the show Trevor.

“Trevor’s a 13-year-old boy, who through a series of journal entries, realizes that he’s gay,” Lecesne explained.

“Amazingly it won an Academy Award in 1995,” he smiled. "That was just incredible!"

The win sparked a conversation.

“At the time, no one was really talking about gay kids,” he said. “It was almost like you just landed in your adult life as a gay person, that there was nothing that led up to it.”

Three years later HBO broadcasted the movie. He and the producers wanted a resource available thought for those who identified with Trevor.

“We found out there was no 24-hour suicide prevention lifeline specifically for gay and lesbian teens,” he said.

So they created, The Trevor Project.

“17 years ago this week, we took the first call,” Lecesne remembered. "And on that first night, there were over 1,500 telephone calls from around the country."

But Lecesne is bringing his mission to a new audience in his solo show The Absolute Brightness of Leonard Pelkey.

“It’s a story of a 14-year-old boy named Leonard Pelkey, who is flamboyant, original and authentic," Lecesne explained. "He disappears from this little New Jersey shore town,”

With no costumes or props, the performance gives the audience the freedom to use its imagination.

“The audience really gets an opportunity to make a movie kind of in their head,” he said.

It's got mystery, drama and humor.

"I think the best way to open people's hearts and their minds is by making them laugh," he said.

And this show connects with everyone.

“We all have a part of us that we are told is a little too much,” he said. “So I think finding a way to try and encourage them is all of our business.”

Progress over the past few years has been staggering. While optimistic, Lecesne believes there's still work to be done.

“We still have to reach back into the middle of the country and into the South where kids don’t have that kind of support,” he said.

And this artist hopes to be that absolute brightness helping promote change.

"I'd love to take this to other places around the country," Lecense said. "People really need to hear this story and to think about it and also think about how they might be able to help young people."

The Absolute Brightness of Leonard Pelkey is currently playing eight times a week at the Westside Theatre.