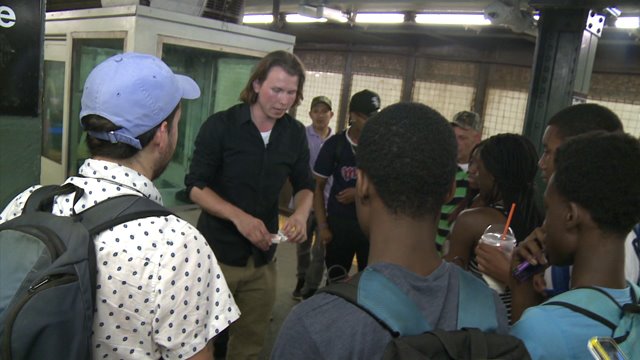 WILLIAMSBURG, Brooklyn -- For four hours, a few days a week, you can find magician Justin Sight on duty at the Bedford Avenue subway station in Williamsburg.

Whether it’s with a coin or a deck of cards, the 25-year-old knows how to win over a crowd.

What sets him apart from most magicians is that he is legally blind, having been diagnosed with Stargardt’s disease when he was 10 years old.

And Sight – whose real name is Adam Jaslikowski – truly has used it to his advantage, taking his love for magic to the New York City subway.

Sight has been working the L-train’s Bedford Avenue platform for the past two years.

He’s been getting a lot of attention lately after a subway rider uploaded a video of him that struck gold on YouTube.

His love for dazzling a crowd has turned into a lucrative business, where the magician has landed gigs at corporate parties and even performed for the Milwaukee Brewers.

“I’m really passionate about what magic does for people past entertainment value,” he said. “I like to use the metaphor how the illusion could put them in touch with something real, something deep inside them.“

While playing cards are the centerpiece of his act, the cards this magician was dealt in life hasn’t slowed him down.

“Its just kind of accepting life for what it is, without any story about it of how it sucks or how great it is,” he explained. “Just really accepting it as it is and just really being present for what it is [as] amazing things can happen.”