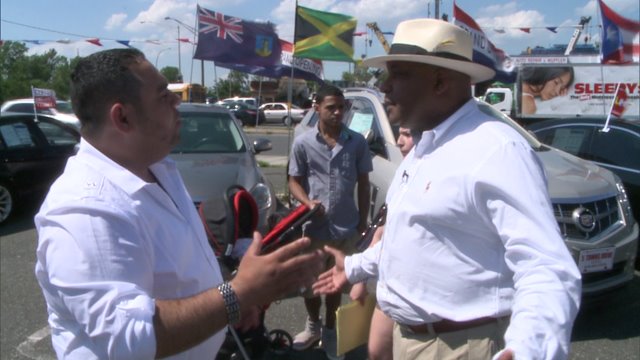 Howard helps a couple negotiate with a used car dealer.

INWOOD, N.Y. — Take a young couple from Pennsylvania, living in Harlem because they have some family issues. Add in two young children, no work, and bad credit. Now toss in a used car dealer who has a “deal” for them.

You know what you have? A total utter debacle.

And when they took it to their own mechanic:

“They said the front and back tires are bad. The rotors. The brakes. The power steering pressure hose. A bushing and a control arm. They suggested a timing belt and motor mount.”

And to top it off, they say at first they didn’t get a temporary registration.  Eventually they got one from New Jersey and they’d still have to get the car registered in Pennsylvania where they live.
So we paid a little visit to the dealership Five Towns Drive in Inwood, Long Island.  The boss is a guy named Malik or Mark.  But by any name he’s a piece of work.

You’ve got to look at the video. I went around with him for a long time. He kept changing his mind.  At one point, in 90 degree heat with Jose and Dominique’s two small children there he refused to return their trade in and refused a refund, leaving them stranded.

That’s when I called the police.

With the aid of the Nassau County PD Malik agreed to return the couple’s car and 15-hundred dollars after he received the Pennsylvania registration. But then a couple of days later, the dealership called Dominique. Malik denied offering a refund. She recorded the conversation.

Dominique: "What did I do to you? I'm just trying to get my money back that you promised me that you would give me."

Malik:  "I didn't promise you anything."

So this is where Dominique and Jose are now.  In a terrible situation thanks to this guy Malik who has no problem telling them one thing and then denying it.

Want a piece of advice? If you’re buying a used car go to a factory authorized dealer.  It may help you avoid characters like this.