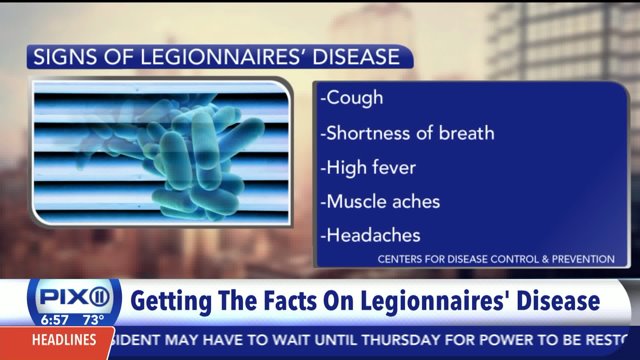 Doctor Steve breaks down everything you need to know about Legionnaires` Disease and how to stay healthy.

THE BRONX — The State Department of Health has deployed about 150 trained officials and support staff to facilitate widespread testing for Legionella bacteria in water tower-cooling systems in the Bronx, the governor’s office announced in a release.

At least 101 people have been infected with the bacteria since July, and 10 people have died from the outbreak, which is the worst in New York City’s history, The New York Times reported.

Health officials have narrowed in on five water-cooling systems in the South Bronx that were found to have the bacteria. Health officials issued an order Thursday requiring buildings to inspect and clean water-cooling towers within the next two weeks. The state is offering free Legionella testing to building owners and operators of buildings with cooling towers or evaporated condenser units that can be sources for the bacteria.

Officials from the Department of Health, Department of Environmental Conservation, Department of State, Division of Homeland Security and Emergency Services, Office of Fire Prevention and Control, New York State Police and State Park Police gathered at the Robert Clemente Start Park to be briefed on the initiative.

"Today we're putting boots on the ground to safeguard the public health and bolster the confidence of a hard-hit community," Gov. Andrew Cuomo said. "We have one simple message for the people of the Bronx: we are here to help.”

The Department of Health will provide results and will work with property owners and managers to disinfect any areas necessary. Building owners with questions about the testing should call 888-769-7243 or 518-485-1159 Monday through Friday or send an email to legionella@health.ny.gov.