Backstage on Broadway: Story behind ‘Amazing Grace’ comes to life in new musical 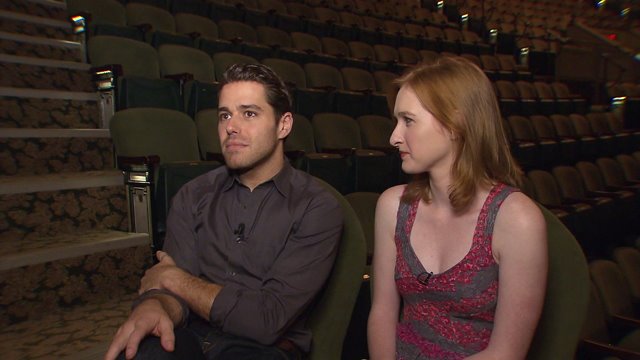 In this week`s Backstage on Broadway, PIX11 meets the actors bringing the story behind `Amazing Grace` to life in new musical

It's a song that transcends generations, an anthem almost everyone's heard, but the story behind it is not as well know.

“I was like wow, this is the stuff that amazing musicals are made out of,” Josh Young said.

“He was a pretty terrible guy," Young explained. "He was one of the preeminent slave traders of the 18th century.”

The show details the tumultuous journey from innocent boy to slave trader to leader of the abolitionist movement.

Helping Newton find his way was Mary Catlett, the love of his life.

Erin Mackey holds everything together on stage and off.

"I keep him in line," she laughed. "She does! Young responded.

This duo's bond comes from a very different kind of show though.

“We’re all about watching the Bachelorette, that’s like the foundation of our friendship,” Young said. “Not our favorite season," Mackey said. "Though it was entertaining, it was definitely entertaining.”

There's a rawness to Amazing Grace, it depicts slavery in a way rarely seen on Broadway.

“If I allowed myself to constantly be in the space of I’m a slave, it’d be overwhelming,” Cooper said. “It takes a moment to come down, a moment to recalibrate so I go home and play solitaire for about an hour!”

He leaves everything on stage pulling from a personal connection.

“My last name is Cooper, and often slaves took the name of their vocation and a Cooper is a barrel maker," he explained while showing me a picture. "When I saw this in Jamaica I was just stunned [because] these Coopers could’ve been related to me.”

But this story of redemption and hope is one everyone can relate to.

“I feel like one of the messages is to not take your loved ones for granted,” Young said.

It all culminates at the end of the performance when the audience joins in singing.

“I think they just want to be part of a human, communal experience that is very tangible,” Mackey said.

“We look out there and we can see how it’s moving people, we can see the tears in their eyes,” Cooper described. “I don’t know if there are words that can really describe that.”

You can see Amazing Grace currently playing at the Nederlander Theatre.