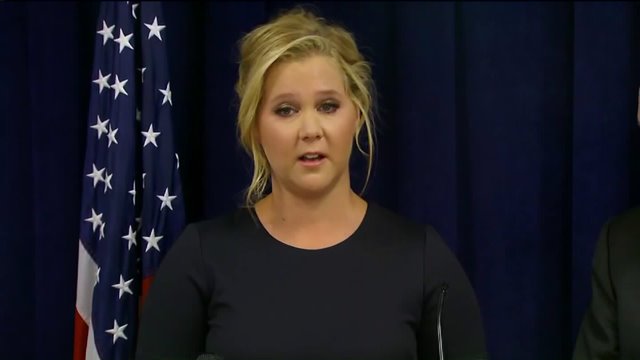 She joined her cousin, Sen. Chuck Schumer, at a news conference Monday morning.

NEW YORK -'Trainwreck' actor Amy Schumer appeared next to her cousin, Senator Charles Schumer, in her first public statement about gun violence in the United States -- one she says will not be her last.

On Monday, the two spoke at 780 Third Avenue, where they introduced a three-pronged plan to help prevent gun violence.

"We're here today to say 'enough is enough' to mass shootings in our schools, our college campuses, our military bases and even our movie theaters," Amy Schumer said.  "For me the pain I share with so many other Americans on the issue of gun violence was made extremely personal on Thursday, July 23 when J . . . I'm not even going to say his name -- he sat down for my movie, "Trainwreck," at the Grand Theater in Lafayette, Louisiana."

That day, John Russell Houser took out a .40 caliber pistol and opened fire during a screening of her new movie, killing two people and injuring nine others.

Amy Schumer said she thinks about the victims of the shooting every day since it happened.  "I just wanted to go down to Louisiana, and then I was just angry."

Tears came to her eyes as she spoke about the attack, and said she is heartbroken.  "Preventing dangerous people from getting guns is very possible, we have solutions," Schumer said.

Sen. Schumer outline those solutions as part of a three-point plan -- offer monetary incentives for those states that submit all necessary records in to the background check system, as well as penalties for those who don't; urge the Department of Justice to compare all states' standards for involuntary mental health regulations; and call on Congress to fully fund mental health and substance abuse programs.

"The time is now for the American people to rally around these changes," Amy Schumer said.  "I'm not saying I'm against the second amendment.  I'm just for these restrictions."

As an advocate for gun control, Schumer says she is going to be speaking out publicly going forward.

"I am expecting a backlash, and I'll handle it the way I've handled it the last ten years."