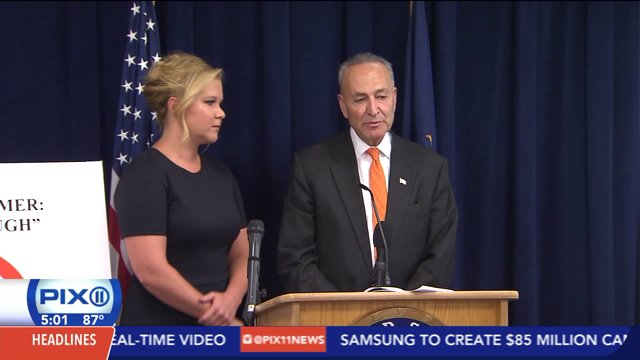 Funny lady Amy Schumer showed her serious side Monday. The actress and comedienne joined forces with her cousin, Senator Chuck Schumer."We`re here today to say enough is enough to mass shootings in our schools, our college campuses, our military bases and even in our movie theaters," Amy Schumer said.

“We’re here today to say enough is enough to mass shootings in our schools, our college campuses, our military bases and even in our movie theaters,” Amy Schumer said.

She spoke out after two women were killed and nine others injured in a mass shooting at a July showing of her movie, “Trainwreck,” in Louisiana. She said she was heartbroken.

She is now supporting Senator Schumer’s proposed legislation that would keep guns out of the hands of felons, spousal abusers and the mentally ill. The senator wants every state to submit background check information to a national database. He also wants enough funding to help the mentally ill as well as reform in how they are taken care of.

“We can't just sit back and allow mass shootings to become commonplace in the United States. We’ve had more than one a month this summer,” Senator Schumer said.

Gun violence flared up in New York City this past weekend. It left three dead and at least 16 wounded. According to Senator Schumer, plugging the loopholes in other states would stop the flow of weapons to New York.

“Ninety-five percent of the guns used in gun crimes do not come from New York City. They come from states that have much weaker laws than we do; without background checks,” he said.

Amy Schumer said these are her first public comments on gun violence but they will not be her last. She vowed to keep fighting.