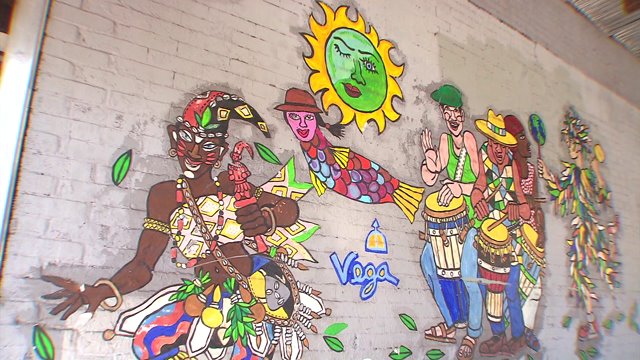 In the living room turned studio of his Upper West Side apartment, artist Manny Vega is finishing up his latest mosaic masterpiece.

EAST HARLEM, Manhattan — In the living room turned studio of his Upper West Side apartment, artist Manny Vega is finishing up his latest mosaic masterpiece.  It’s a portrait of Dr. Antonia Pantoja, an activist and educator, who was the founder and inspiration for several organizations addressing the social and educational needs of a growing Puerto Rican community.  Six years before her death in 2002, she was awarded the Presidential Medal of Freedom, the nation’s highest civilian honor.

“She got this medal for being the den mother of the community, for looking out for us.  And so, if we can retell that story, we can remind young people to step up, and be den mothers, and den fathers, and big brothers in the future,”  Vega said.

Vega is a painter, printmaker, muralist and these days, mainly a mosaicist.  His works are part of East Harlem’s urban landscape.  A couple of his creations grace the walls of the 110th Street and Lexington Avenue subway station.  On East 106th Street, you’ll find his mosaic of the late Puerto Rican poet Julia de Burgos.  And a block away, is his favorite public piece, called Esperitu.

“It embraces spirituality, culture and history together in a very tongue and cheek type of way,” Vega said.
“I support and love museums and galleries.  But I also live with the notion that art can also be in your day to day, in your living environment where you live.  It should be around you, the same way that air and water and the natural elements surround you, because it does enrich your life, it does exalt the aesthetic of your living.”

Plans are in the works to have the portrait of Dr. Pantoja installed outside a NYCHA building, possibly at the Corsi Houses for seniors.

“After resident input and community collaboration, we are excited to see Manny Vega’s mural move forward.  We are working out the final logistics and required legal processes, but expect this project to come to fruition soon, where it will serve to beautify and enrich the East Harlem community,” said a spokesperson for NYCHA.

Vega is hoping it will be up in time for Dr. Pantoja’s birthday on September 13.