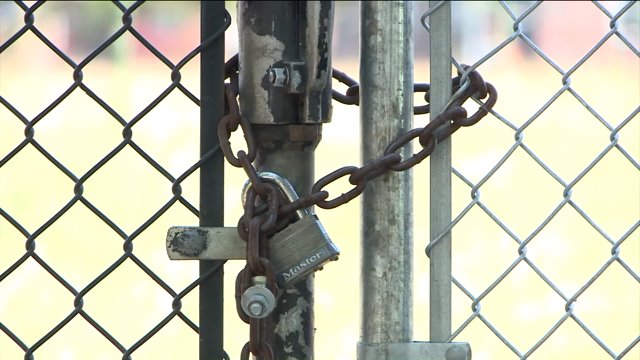 RED HOOK, Brooklyn — The boys of summer are meant to take the field at baseball diamonds throughout the city, but there won't be any home runs, strikeouts or double plays at several fields in Red Hook for the foreseeable future. That's because the Environmental Protection Agency found high levels of lead in the dirt where players would normally dig in their cleats.

"Wow, that's crazy. That's unsafe for the kids," said Red Hook resident Crystal Vega as she escorted three children to a nearby pool.

The EPA said the contaminants came from the Columbia smelting facility which used to stand on the corner of Henry and Loraine streets back in the 1920s and '30s. But the factory is long gone so the city might have to foot the bill for the cleanup -- a process that essentially just covers up the contaminated soil under a new surface. It could cost tens of millions of dollars and in a recent report the EPA said "the entire project could take several years to completed."

"Well, it doesn't surprise me because the larger environmental franchises do this all the time," said Zenobia Lassiter, who lives in the Red Hook houses just across the street from the ball fields.

Even though the fields are closed she says she's worried about being exposed to the lead during the cleanup.

"I feel very much afraid that by messing with what's already there it will expose us to contaminants in the air," Lassiter said.

The EPA also found contaminants at ball field No. 9 just across the street. That field will remain open after the soil test found lower levels of lead, but many in the neighborhood are still worried about kids playing on the field.

Lassiter said "obviously" the field shouldn't be open for children to play on.

But the EPA assures residents in the neighborhood the lead levels at field 9 "are not an immediate health concern." In the meantime, they suggest washing your hands and removing your shoes outside your home to avoid lead exposure if you've been playing on the contaminated fields.