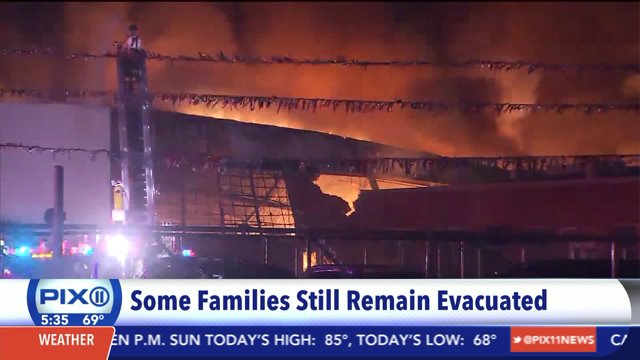 NORTH BRUNSWICK TOWNSHIP, N.J. – It was a long sleepless night for hundreds of residents of several North Brunswick apartments evacuated after a massive warehouse fire.

Evacuated residents are still not allowed back into their apartments and air quality is also a cause for concern.

Many families slept on cots in gyms at Linwood Middle School.

The five-alarm fire broke out just after 2:30 a.m. Wednesday at the DCH Collision Center on Livingston Avenue.

More than a hundred firefighters battled the massive stubborn fire.

North Brunswick firefighters answered the call of the initial alarm to the backside of the building.

But after fire officials say the sprinkler system was unable to contain the fire quickly out of control–– more manpower was called in from five surrounding counties.

More than 150 firefighters focusing on flames in the part of the building that houses a plastics business.

Eight businesses were destroyed in a warehouse that contained many home finishing products.

Firefighters decided to let it burn out.

About 200 people who fled to a nearby shelter could not go home for the night and are still there this morning.

The frustrating part – they still don't know when they will be able to go home.

It's all about those air quality tests.

Officials say they believe the smoke is not toxic, but many evacuees aren't so sure.

The EPA is monitoring the air quality as is Middlesex County HAZMAT units as the smoke plume moves down due to the burning plastics.

An EPA official said that while there are concerns over toxins, current readings have not revealed any health threats.

Officials say they have to wait for the fire to be extinguished before they can begin their investigation in the case.