Record heat reflects climate change, but is there more to it, ask experts 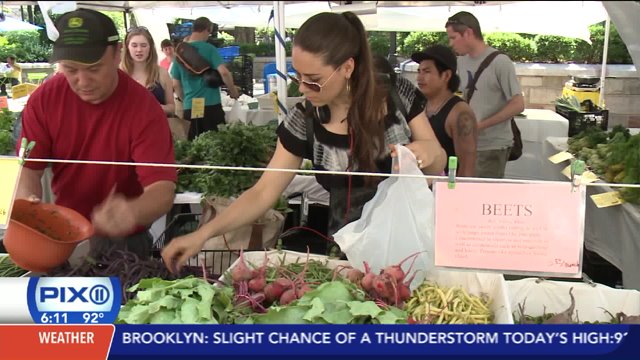 NEW YORK — Ask a hundred scientists during this week's heatwave if the climate is changing, and quite probably ninety-nine will say yes.  And while each of the one hundred might have a different interpretation of what the environmental changes mean, the upshot appears to be the whole planet adapting to a new normal that could affect most people in very personal ways.

That could mean changes in everything from crop growth to recreation, but one of the world's foremost experts on climate change says that while it is an issue to be taken very seriously, it may not always be the only factor causing changes around us.  In fact, he told PIX11 News, some serious, but less apocalyptic, issues may be at work.

Without a doubt, Monday was a scorcher.  The scene near the farmers market at Union Square saw some people using newspapers, and others carrying umbrellas to stay sheltered from the blaring hot sun.

"He needs all that ice today," said Michelle Hall, as she watched the operator of her lunch cart pour ice over the drinks in the cooler.  "It's so hot, it's crazy. 93 degrees."

She was certainly right, and the temperature in parts of the Tri-State ended up climbing to 94 degrees, but this has been the first week this year metro New York has had any temperatures in the 90's.  It's actually been a fairly mild summer.

But that's here in New York.  Worldwide, it's another story.

"2014 was the hottest year on record," Steven Cohen, PhD pointed out, citing official temperature readings worldwide.  "There's very little question that human beings and what we do are heating up the planet."

Cohen is the executive director of the Earth Institute at Columbia University, one of the world's largest and foremost institutions for the study of earth sciences, including climate change.   He said that changes in climate, caused by human activity, are underway.

That could mean, according to some climatologists, that some crops that people heavily rely upon, such as wheat, could see such changes in their growing conditions that they couldn't be grown in the quantities, and maybe not even with the same nutritive strength that they have now, due changes in their  growing seasons.

The climate difference could also be behind scenes like one that ended up being viewed millions of times on different media platforms over the weekend — when world class surfer Mick Fanning was attacked by two sharks during a surf competition in South Africa.  Sharks prefer warmer water, and the waters on many shores worldwide is increasing in temperature.

However, Dr. Cohen, the Earth Institute director, points out that it may not just be climate change at work.

Cohen said that while all scientific research shows that humans are changing the climate, "Stand behind a truck," he said to any doubters of climate change, "and tell me that the truck isn't making that street warmer."

Despite that, Cohen, the author of a dozen books about managing Earth's resources with a changed and changing climate, said that there's no need for people to despair just yet that we're ushering in Doomsday.  Not just yet.

"We're not going to shut down the economy, we're not going to shut down the fossil fuel business, but we've got to start that transition as soon as possible," said Cohen.  He's convinced that human ingenuity and its will to survive can prevent civilization from ultimately destroying itself through greenhouse gas emissions.  "There have been predictions of the extinction of the human species" for centuries, Cohen told PIX11 News.  "I believe human that beings are ingenious and we're not suicidal."