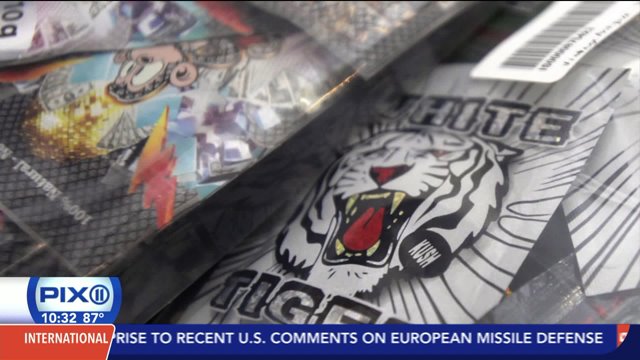 HARLEM, Manhattan — When PIX11 Investigates parked on Lexington Avenue near 124th Street on a recent July afternoon, we stumbled upon a small crowd staring at a man on the sidewalk. The man’s eyes rolled back in his head and his thumb was twitching uncontrollably.

“He might be having a seizure,” pedestrian Thomas Serrano told PIX11, “but nine times out of 10, they’re smoking K2.”

Within five minutes, another passerby summoned police and paramedics around the corner, where another man was sprawled on the ground. Several ambulances raced to the scene from various directions, as a woman named Leanna Franco said, "They should rename Lexington Avenue 'K2 Boulevard.'"

K2 is just one brand name among many types of synthetic marijuana  flooding the marketplace in recent years -- on the Internet, in gas stations, and at local delis.  It’s packaged as potpourri or incense with warnings that it’s not for human consumption, but teenagers and poor addicts have been abusing it; sometimes, with deadly results.

Fifteen people have died in the United States this year from a bad reaction to synthetic pot with more than 4,300 calls made to poison control centers as of July 6. The reactions can be severe, with some users having psychotic episodes and exhibiting severely violent behavior.

Some require an infusion of sedatives to calm down. It can cause kidney and respiratory failure and dangerous swings in blood pressure. It’s also addictive.

“This is not marijuana,” said Dr. Robert Glatter, an emergency room physician at Lenox Hill Hospital. “This substance can be deadly. It can kill you. The brain almost gets melted down.”

Glatter told PIX11 there needs to be a stronger public health outreach about synthetic marijuana, which started to get more attention a few years ago.

Last year, federal agents raided stores in 29 states that were selling the phony pot, which is actually dried plant material sprayed with cannabinoids. The chemicals used to create the high are usually produced in China.

The feds were especially concerned about something else they found at a store in Birmingham, Ala. In Birmingham, the agents discovered $38 million  worth of wire transfers to Yemen.

Yemen is known as a major base for terror training and plotting.

Why was all that money going to Yemen? Is the sale of synthetic marijuana a way to poison American youth—and finance terrorism at the same time?

Several years ago, PIX11 Investigates reported on stolen pharmacy goods being sold in bodegas, with some of the money earmarked for jihad. Now, it’s clear, the Drug Enforcement Administration and police are keeping an eye on synthetic pot as a potential money maker for terror groups.

On July 2,  the NYPD, Health Department and Department of Finance sent investigators to raid some Harlem delis. City Council speaker Melissa Mark-Viverito requested action, alarmed at the growing number of emergency room visits being spawned by reactions to K2.

The investigators went to five delis in Harlem and East Harlem. They found a total of 8,000 packages of synthetic marijuana, which can’t be legally sold in New York State -- or any other state.

About 1,300 packets were removed from a display case behind the counter of Gourmet Deli on Lenox Avenue. A manager there named Mohamed Tarat faces criminal charges, but he was released from jail on his own recognizance July 3. He has another hearing in October.

When PIX11 showed up at Gourmet Deli on July 10, a man who identified himself as Tim approached us and asked us to leave.

“This is our place of business,” he said with a slight Southern accent. “We don’t discuss that. We don’t have anything to do with that,” he said, apparently referencing the sale of synthetic marijuana. “We don’t deal that drug. We don’t sell.”

When I asked Tim if he was an owner of the deli, he responded, “The owners don’t ever come here. They’re in Yemen.”

Several nearby residents said Lexington Avenue and 125th Street was the headquarters for synthetic marijuana activity in Harlem, and they were right. That’s where we found smokers toking it in broad daylight, and the men overcome on the sidewalk.

One 51-year-old woman named Caroline was open about her synthetic pot use.

“I used to smoke crack,” she told PIX11 Investigates, adding, “I don’t get high anymore. I just smoke K2.”