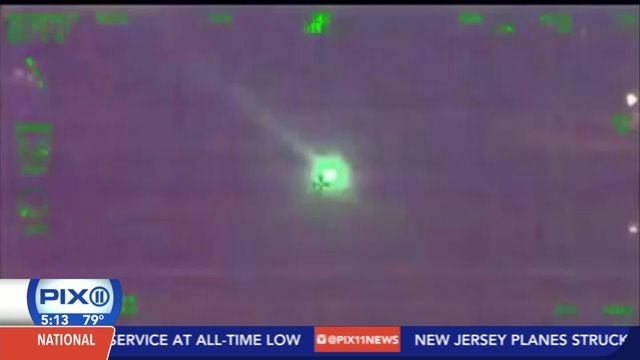 NEWARK, N.J.– It's a situation that could have potentially resulted in hundreds or even thousands of deaths.  Fortunately, lasers pointed at a dozen different aircraft that flew into or near Newark Airport Wednesday night did not have the worst effect, but the incidents have officials from two federal agencies and the New Jersey State police searching for suspects.

Eight hundred million passengers fly in and out of the U.S. daily, and one of the greatest threats to everyone's safety is the abuse of lasers, which can be commonly bought online or at electronics stores.  Because their beams can easily extend for miles, a laser abuser can fairly easily cause damage to a flight crew's vision without being detected.

A prankster, bored person or terrorist may have been behind the illegal incidents on Wednesday, from around 9:00 to 10:30 P.M.  As investigators try to track that person, or people, down, airline passengers weighed in on a problem that can affect them personally.

"People should know how to use [lasers]," said Mahima Jaimi, who'd just arrived at Newark from a flight from Bangalore, India.  "And [they should] know that they can reach that far and they can have an impact on people's vision," she said.

The second big danger is the color of the beam.  Green lasers, as opposed to the more common red ones, are intense.  At close range, some of them are capable of cutting through paper.  They're also more visible and, therefore, more harmful to the human eye.

In fact, a pilot is now reporting blurred vision after being one of at least two dozen flight crew members whose cockpits were flashed by green lasers over New Jersey Wednesday  night.

"What in the world were you thinking?" asked Patty McNerney, a New Jersey mother who was at Newark Liberty picking up her daughter from a flight from London. She described someone pointing a harmful laser at "all those people on the plane that everybody here is waiting for," as "crazy."

Last March, when a Bronx resident was arrested for pointing a laser at a plane near La Guardia Airport, U.S. Senator Charles Schumer described a scenario in which "a green laser was used to blind a pilot and the plane" crashed with hundreds of souls aboard.  "Praise God that hasn't happened," said the Senator as he called for stiffer penalties for laser pointer abuse,  "but it could."

His words seemed to very much on the minds of FAA and FBI investigators in the wake of Wednesday night's laser incidents.

During an hour and a half stretch Wednesday, three American Airlines planes, two Jet Blue planes, and one plane each from Delta, GoJet, Porter, Republic, Shuttle America and United Airlines, as well as a Coast Guard aircraft were all hit -- some more than once -- by a laser beam that came from various locations in north and central New Jersey, at different times,as the planes flew into or over the international airport.

"[It's] kind of stupid,but dangerous," said Dylan Elliott, who'd just arrived on a flight from London.  "I wouldn't be safe if we were landing then and someone was shooting a laser in your eye.  I wouldn't want to be on that plane."

Currently, a man in California is serving a 14-year prison sentence for pointing a laser at a helicopter, and a Bronx resident awaits sentencing for that March laser pointing incident. People convicted of the crime can also face a $250,000 fine.

Federal authorities are offering a $10,000 reward for information leading to the arrest of anyone who has shone a laser at an aircraft. The number of such incidents has risen steadily over the last few years.  Currently there's an average of more than ten per day nationwide.

It's highly unusual to have a situation like Wednesday's, with so many planes flying in the same area getting lasered.  Nationwide on Wednesday, there were 35 laser pointing incidents. A dozen of them happened to central and north Jersey aircraft.