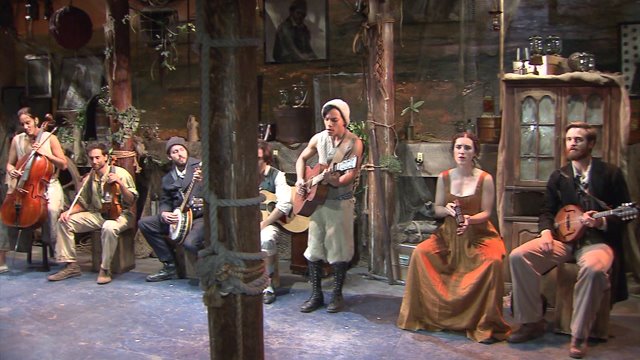 In this week`s Backstage on Broadway, PIX11 takes a look at a new show bringing unique music and new life to South Street Seaport.

The songs of the sea are taking over lower Manhattan!

Tucked away in the South Street Seaport District is a brand new show called Seawife.

“Seawife is a story about the pursuit of belonging in this world," Liz Carlson, director, said. "It’s inspired by that very universal trope of nature vs. nurture.”

The story follows a man named Percy who grows up in the shadow of his father during the height of the whaling industry.

“But Percy, as much as he loves, respects and reveres his father, he can never quite embrace this life himself,” Tommy Crawford, 'young Percy' and the show's musical director, explained.

This show does things a little different.

“Something that’s pretty unique about our show is that it’s a band doing a play but also as a concert,” Crawford smiled.

“You go from these really intimate moments onstage with another character or actor and then all of sudden you have permission to look at someone in the eye and have a real connection with them,” Eloïse Eonnet, who plays Seawife, said.

Something this ensemble does seamlessly. They've worked very closely for the past two years after forming a band during their time together in another play.

“Our band is named The Lobbyists," Will Turner, who plays 'older Percy,' said. "Named not for any political leanings but because we began playing in the lobby of [The Flea] Theater.”

“It just happened very organically," Eonnet remembered. "We started playing together but when the show closed, we continued.”

Soon after, they set sail, creating a show from scratch. But Seawife needed the perfect location.

“We had a pipe dream of doing it South Street Seaport," Carlson said. "It is the oldest district in NYC, it has such an incredibly rich nautical history.”

That's when they found the Melville Gallery at the South Street Seaport Museum.

“This place is just seeping with ambiance,” Crawford descried. "From the beams to the ceilings, it’s all very evocative of the belly of a ship.”

These young artists have also helped breathe new life into the area, which is still recovering from the devastation caused by Superstorm Sandy.

“Being able to bring a piece of art here that drives hundreds of people here every single week that then spills into the local venues has been really a wonderful side effect,” Carlson smiled.

Seawife has seen success this summer, announcing this week that it's adding another week of shows.

But the real secret to getting everyone in the 19th century seaport mood...?

“There must be liquor and people must drink it!” Crawford laughed.

“There’s shots of rum for a few dollars," Turner said.

“We look at it from over here on stage and can’t wait to finish the show,” Eonnet smiled.

“I usually have a personal little bottle of Bourbon that we enjoy,” Carlson laughed!

You can catch Seawife now through July 26 in the Melville Gallery at the South Street Seaport Museum.