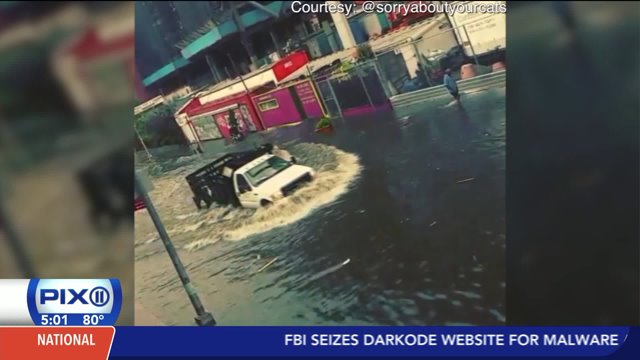 Torrential rain filled the streets of brooklyn after sewers backed up, especially in the Gowanus section of the borough.

GOWANUS, Brooklyn - The sky opened up over New York City Wednesday, causing flooding and leaving some Brooklyn streets -- especially in Gowanus -- under several feet of water.

The Doppler radar initially reported a torrential downpour that dropped an inch of water in just 30 minutes, creating flash flooding.

By 1 p.m. when a flash flood warning expired in Manhattan and Brooklyn, several inches of rain had fallen.  People outside the Gowanus Ballroom could be seen trudging through thigh-high flood water, some carried their bicycles over their heads.

In total, the Doppler radar indicated rainfall amounts over two inches across a good portion of Brooklyn and Queens. Some spots like the Rockaways received as much as four inches of rain.

Eventually the storm moved southeast toward Brighton Beach and the Rockaways and flash flood warnings were extended to southern Brooklyn at 12:45 p.m.

After storm clean up pic.twitter.com/UHGwF4fNk0

Power flickering on and off. some 9f the street is flooding, getting pretty intense down here #rockaway

The storms are expected to diminish heading into the evening hours -- a wonderful end to the work week is expected with sunny skies and low humidity.  Temperatures will climb to around 80 degrees during the afternoon.