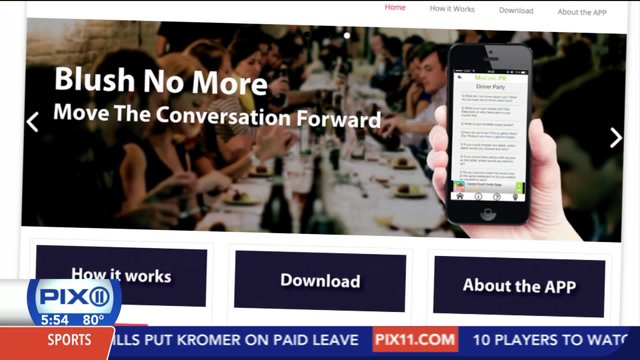 A new app is helping people break the ice in conversation with new people.

NEW YORK – Having trouble finding a solid conversation starter is an issue more common that you think, especially in a diverse city like New York where awkward silences are a dime a dozen.

A new app called “Blush No More” is helping users do just that: suggesting perfect ice breakers to keep the conversation going.

“The aha moment for me was when I was at a networking event and I ran out of things to say,” Mark Macias, the brains behind the Blush No More app told PIX11 News.

Macias, a former journalist who now runs a top tech PR firm, says the app is relevant now more than ever considering how the smart phone and social media culture has made face-to-face contact a dispensable practice.

“I’m always meeting people who you know, they don’t look you in the eye.,” he explained. “They’re talking to you and they just look nervous.”

“It may seem like common sense but I would challenge anyone the next time you are at a dinner party, you’ll [probably] run out of things to say to strangers.”

From dinner parties to when you’re at a bar, there are over 250 questions in the app that will keep the ball rolling.

The app has tremendously helped users like Iwan Lubberts who is six months removed from his native Holland. He pulls up the app whenever he finds himself at a loss for words.

“It really makes you feel like a local,” he said. “If you look up the lines, they are pretty American. It’s helping me out to understand American people and how to deal with American people in language.”

One pointer Macias offers up to anyone thinking of getting the app: put the phone away before you start up the conversation.

“You shouldn’t be talking to someone when looking at this cheat sheet,” he said. “I mean you can’t beat people over the head with everything.”