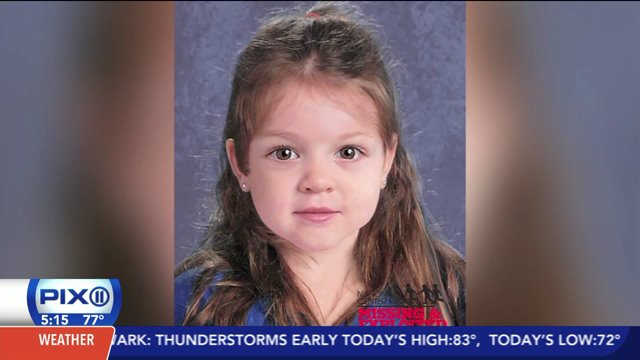 The little girl, believed to be about 4 years old, was found in a garbage bag on a Boston beach June 25, 2015.

BOSTON, Mass. — Investigators are trying to determine whether the recently discovered body of a 4-year-old girl along a Massachusetts beach is related to the 2011 disappearance of a baby in Michigan, FOX17 reports Thursday.

Detective Sgt. Tom Posma, with the Mason County Sheriff’s Office, told FOX17 his department plans to discuss with police in Boston their ongoing investigation into the case of Katherine Phillips, who was 4 months old when she went missing June 29, 2011.

Phillips was last seen wearing pink shorts and a pink tank top with black and pink flowers. She was traveling with a man in a silver Oldsmobile, according to the National Center for Missing and Exploited Children. That vehicle has been recovered, but the little girl -- dubbed Baby Kate -- was never found.

Baby Doe, left, was discovered dead in a garbage bag on a Boston beach. Baby Kate, right, disappeared in June 2011 from Michigan. Investigators are looking into whether there is a connection between the two little girls. (Photo: Massachusetts State Police Department and National Center for Missing and Exploited Children)

Baby Kate would be 4 years old now -- the same age as the still-unidentified girl whose body was found in a garbage bag on the western shore of Deer Island on June 25, Massachusetts state police said.

Last week, that agency released composite photos of what Baby Doe may have looked like when she was alive as well as images of polka dot leggings and a zebra-stripe blanket found with the child’s body. Police released a new updated photo Friday showing the girl with earrings. Those pictures have been seen and shared more than 45 million times since they were first published.

“Part of the reason why they put stuff out is to solicit information from not only the community but other law enforcement,” Posma told FOX17, explaining that his department plans on sending information about their investigation to Massachusetts authorities by the end of Thursday.

“At this point we’re looking into it and if the pieces fall together, we’ll continue to go down that path,” Posma said. “We’ll put the information out and then we’ll wait for them to get back with us.”

A Facebook page dedicated to finding Phillips pointed out in a post that Baby Kate had blue eyes, while Baby Doe had brown eyes. Though commenters pointed out that babies’ eyes can change color as they age.

Readers nationwide are trying to help solve the mystery of Baby Doe. Police said many commenters have suggested perhaps the girl is Aliayah Lunsford, who disappeared in West Virginia. Investigators said they’ve ruled out that possibility but continued to urge the public to send them tips.

“Please help us speak for this child who can no longer speak for herself,” state police said.