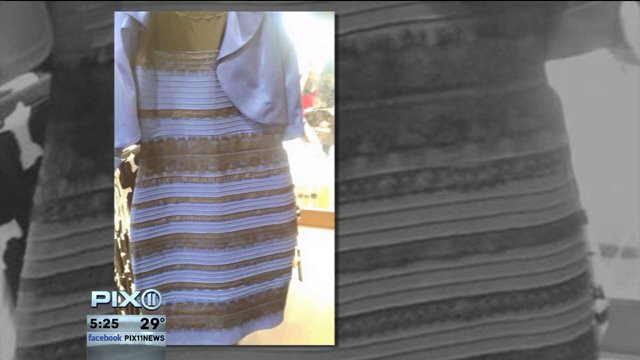 On Thursday, the internet lost its mind.

It all started Wednesday evening when Twitter user @totallymendes tweeted a photo of two nail polishes held against a hig-heels shoe, asking “WHICH COLOR MATCHES THE SHOES BEST?”

The tweet has amassed 6,000 retweets and hundreds of replies — and barely any agreement.

WHICH COLOR MATCHES THE SHOES THE BEST pic.twitter.com/Qv3mpOOf8w

There was some debate in the PIX11 newsroom Thursday night as to which polish matched the shoe, and we could not come to a majority consensus.

For some, the left, more purple color matches the shade of the shoe exactly. For others, it’s the polish on the right with a more hot-pink hue. Some have even commented the shoe changes color whether you’re closer or farther away from the monitor, or whether you’re looking straight on or at an angle.

Is it a trick of the fabric? Maybe a fault in the photo?

Several possible reasons for such a disagreement were given when the photo of a dress posted online appeared blue and black to some, white and gold to others.

“Because both blue- and yellow-tinged light are present in the image background, some people’s brains perceive the original image as being lit by blue light (or just the photograph being tinted blue) while others perceive the whole scene as being lit by yellow light. But while our brains are making that judgment we’re actually focused on the dress, and so we’re expressing the outcome of an automatic, unconscious judgment about the light as a judgment about the color of the dress.”

Which polish do you think matches the shoe?