Backstage on Broadway: Christian Borle gives Tamsen Fadal a tour of Something Rotten 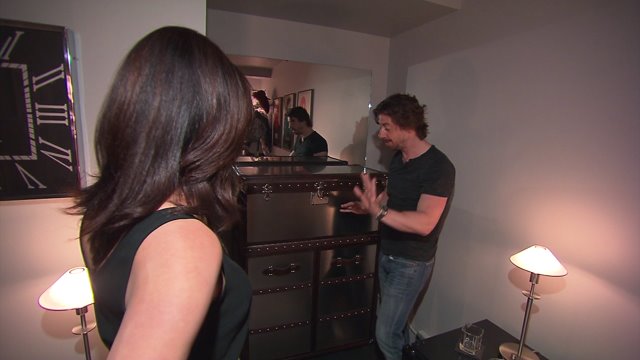 In this week`s Backstage on Broadway, PIX11`s Tamsen Fadal gets a not so rotten behind the scenes tour of "Something Rotten!"

In this week’s Backstage on  Broadway, I get a not so ‘rotten’ behind-the-scenes tour of his Tony-nominated show.

“This is my baby, this is post-show, I need to make that very clear post-show,” Christian Borle said as he showed me his dressing room liquor cabinet.

Christian Borle is toasting to a great year.

“[This is how I] lure people in because my natural personality doesn’t,” he laughed.

That may be the case backstage, but on stage, he can't keep people away.

"I play this raging narcissist, who’s completely full of himself,” Borle said.

Borle stars as The Bard in the Tony-nominated musical comedy Something Rotten!.

“You’ve got some moves that people have captured now in the show," I said. "It’s a finite amount of moves, basically hips to the left, hips to the right," he laughed. "But for some reason people go crazy right?" I asked. "Well, the pants are really tight.”

Hot pants that just scored him a second Tony award.

The longtime stage actor is also finding success on screen.

From a hard-nosed lawyer on "The Good Wife" to a technology specialist in "Blackhat."

But Broadway is where his heart is.

"I like living in New York City, and I like walking to work, and I love this community,” he smiled.

This show is extra special to him because of the cast.

He gave us a special behind the scenes tour to meet some of them.

After talking with several of the cast members, I realized they have just as much fun off stage as they do on stage.

We did have one final request though...

“You going to show me the thrust?" I asked. "It feels a little obscene doesn’t it?” he laughed. “I basically thrust everything that’s been given to me by nature, in their faces for three minutes."

He said if you want to see that move of his, you're just going to have see the show for yourself.

Something Rotten! is playing at the St. James Theatre.