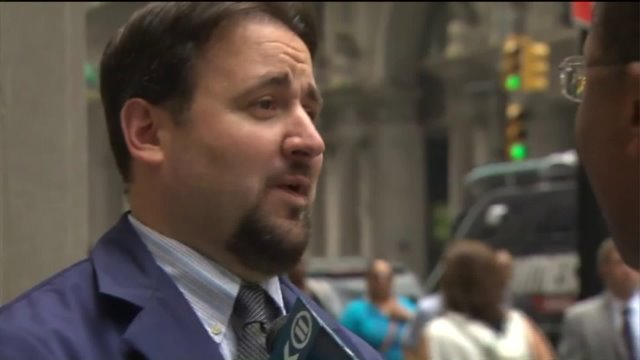 NEW YORK -- United Airlines, the New York Stock Exchange and the Wall Street Journal all ceased operations temporarily on Wednesday, due to computer malfunctions.  The outages ranged from about an hour, in the case of the Journal, to nearly four hours at the stock exchange.  The Department of Homeland Security denied that any of the issues were related, but some cyber security experts were not convinced, and neither were some of the people affected.

Outside of the stock exchange, during the first couple of hours after its computer system went down, mum was the word by and large among traders.   When one was asked if news media were making too much of the exchange shutting down, "Exactly!" was his emphatic reply.

Also, the body language of traders spotted outside of the exchange building at Wall and Broad Streets was a sharp contrast to how they can appear in more stressful times, like the stock market collapse of 2008.  During that period, on daily trips to Wall Street, traders were visibly tense.  Not so for most of Wednesday.

But 2:00 became 2:30 to 2:45, which then became 3:10, which came and went.  Still, the overall feeling on Wall Street was cautious optimism.  When PIX11 News asked Mosian to clarify that the stock market  would still be in decent shape as long as its computers were back up and running before the market's close, he answered, "You are correct."

That's because most people's financial health is determined by stocks' closing prices, or their value at the close of the business day.  33 minutes before that, or nearly four hours after the market first came to a standstill, the exchange was brought back into operation.

Its data center, which is located in a 400,000 square foot facility in Mahwah, New Jersey, came back online.  While it was down, however, its loss had worldwide impact.  Its crashing coincided with the other two major corporate technical problems, which did not go unnoticed on Wall Street.

"Everybody was a little nervous," said Mosian, because of what he called a "cyber-attack" on United Airlines, "and I guess the Wall Street Journal also went down," he added.

Specifically, he was referring to how a malfunctioning computer network router left nearly 5,000 United Airlines flights worldwide grounded for well over an hour, racking up huge costs in fuel, overtime and other expenses.  Also, one of the most important news outlets for getting updates on the technical problem outages, the Wall Street Journal, had nothing but the phrase, "Oops, 504" and a subtitle on its homepage.  That's how it remained for the better part of an hour.

So, from around 9:00 A.M. to 3:20 P.M., three different major corporate entities were unable to do business.  The Obama Administration insisted that it was merely an uncanny and unfortunate coincidence, but more than one security expert cast doubt on that.

"Just because the White House says it's not, does not make it not a security breach," said Manny Gomez of MG Security Services, and a cyber security expert.  "Three of these organizations getting tampered with, glitched, or whatever they want to call it, is clearly a problem."

"We really can't determine until the proper investigation is done," added the former Marine, NYPD sergeant and FBI agent, who's now an attorney.  "But it seems very suspicious to me that these things were happening coincidentally, and it's obvious to everyone that we are under constant attack."