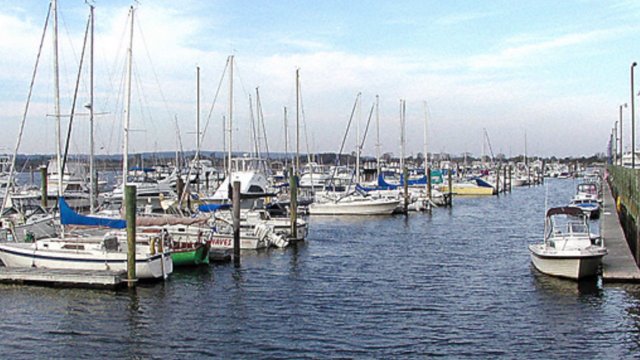 STATEN ISLAND — Ann and Ed Piazza have a sailboat in their Staten Island backyard.  And they'd like nothing more than to get rid of it.

It's been there since Hurricane Sandy. It's a decaying hunk and they had no idea who owned it.  Every time they contacted an agency for help they were told nothing could be done because it was personal property.

We first told you about their plight in October.  Since then we've been trying to find out who owns the boat.

We finally got hold of the last registered title with the DMV.  We spoke with the gentleman listed as the owner there. He told he'd sold it to a guy named Neil MacMorrow.

So Ann and I went to MacMorrow's house.  He wasn't home so I called him.  Here's some of the conversation:

Neil MacMorrow: “I never had anything to do with a boat. I was not the one...I don't own the boat”

Neil: “You have to prove ownership, mister.  And you better prove it because I’ll sue you for harassing me.”

Ann Piazza: “We have the boat is right in my backyard.  Now it’s been there rfor 3 years, two and ahalf years. It’s disgusting.”

Neil: “I would give you some advice. Either take a collection and take it out yourselfor get FEMA to do it.”

The previous owner looked at the boat again and tells us he's sure that was the vessel he sold to MacMorrow.

And, by the way, the local marina says MacMorrow owes it money for docking the boat.  MacMorrow claims he was only there on some business.

Oh, you may be wondering why the U.S. Coast Guard is of no help to the Piazzas.  Well the Coast Guard tells us it doesn't have jurisdiction. It can only move disabled vessels if they threaten federal waterways or are environmental hazards.

So if you have any idea how to get rid of a decaying 29- foot sailboat without spending a fortune, please let us know.