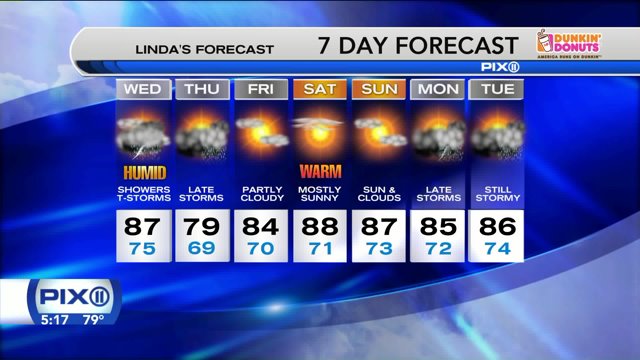 The day began partly cloudy and very muggy. We could definitely feel the humidity that carried over from the day before. This warm air will remain in place through today as a cold front makes its way to our area, coming from the west.

The high for Wednesday will be 87 in the city, upper 80s in the suburbs.

"We do have some issues over the next 48 hours. So humid yesterday, again, incredibly humid out there today," PIX11 New meteorologist Linda Church said.

At noon, we will remain mostly cloudy and muggy, Church said.

"During the afternoon hours, especially if you get a break in the clouds and see a little bit of sunshine, that is going to add to the volatility in the atmosphere, and these afternoon thunderstorms are going to start to creep up," Church said.

With these storms, residents can expect some very heavy downpours and potential accumulations of 1 to 2 1/4 inches of run. It will not be until evening -- between 8 and 9 p.m. -- that the area begins to dry out.

For Thursday, Church said to expect the same pattern and a mostly cloudy start to the day.

"Tomorrow's rain showers are generally close to sunset and then you get these big-time storms again, heavy downpours possible, street flooding with that," she said.