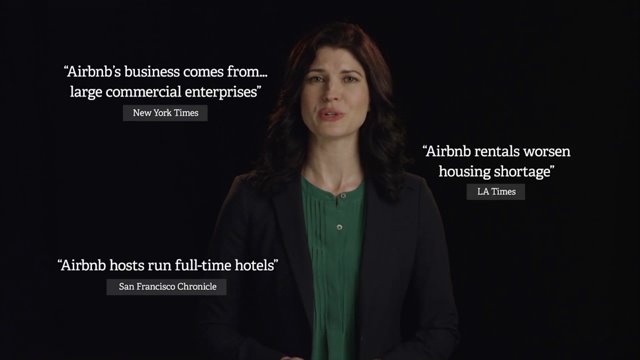 The battle against Airbnb continues. For years, housing organizations and local leaders coming together saying big profit companies are taking advantage of New York and allowing the big guys to profit while the little guys lose out. This time that message coming out through an ad that may seem a bit familiar.

A new campaign is out against Airbnb.

"We thought it was very iconic. I think once you are drawn in to the concept you see what airbnb is really about," said James Freedland of ShareBetter Coalition, the organization behind the new commercial spot.

The group works with local politicians, community leaders and organizations and are telling people to not be duped by Airbnb's latest friendly homesharing campaign.

Instead the organization says Airbnb is really all about profit for the rich, catering to large commercial real estate brokers. Manhattan Assemblywoman Linda Rosenthal said her office uncovered just that during a recent sting operation.

Big city landlords were seen in the Upper West Side and Midtown taking hundreds of units off the market, some even rent regulated ones and instead putting them out to the home-sharing site to earn lucrative fees.

"These were apartments controlled by landlords and these are the big real estate moguls, who are profiting. What needs to happen is the administration has to up its enforcement. It's very easy to find out who's renting and what is on Airbnb's website, " explains Rosenthal.

In a statement to PIX11, Airbnb said: "This ad is dishonest and the hotel industry lobbyists who paid for it should know better by now. 90 percent of Airbnb hosts in New York simply rent out the home in which they live."