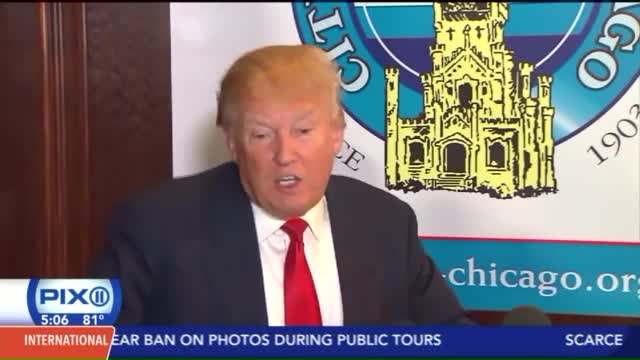 Hours after Macy's abruptly ended a business relationship with Donald Trump, the city is reviewing Trump's golf course deal in the fallout of Trump's controversial remarks.

NEW YORK — Hours after Macy's abruptly ended its business relationship with Donald Trump, PIX11 News has learned that Trump's golf course deal with the City of New York involving the much revered Trump Golf Links at Ferry Point is being examined in the fallout of Trump's controversial remarks regarding Mexicans.

Mayor Bill de Blasio telling PIX11 News the following in a statement, "We are reviewing Trump contracts with the City.  Donald Trump's remarks were disgusting and offensive, and this hateful language has no place in our city," said Mayor De Blasio, who then added, "Trump's comments do not represent the values of inclusion and openness that define us as New Yorkers.  Our Mexican brothers and sister make up an essential part of this city's vibrant and diverse community, and we will continue to celebrate and support New Yorkers of every background."

The scrutiny of Trump and his collaboration with the city at Ferry Point comes after Macy's on Wednesday became the latest corporation to end all business ties with the controversial GOP candidate for president.

The company who has sold the Donald Trump fashion line since 2004, issuing a statement this morning saying that "We are disappointed and distressed by recent remarks about immigrants from Mexico. We do not believe the disparaging characterizations portray an accurate picture of the many Mexicans, Mexican-Americans and Latinos who have made so many valuable contributions to the success of our nation."

Trump, who is a GOP candidate for President, responded via Instagram where in the first sentence he announced that, "I have  decided to terminate my relationship with Macy's because of the pressure being put on them by outside sources."  He later questioned via Twitter whether or not Macy's should be classified as racists after being fined $600,000 by the New York State Attorney General for the "Shop and Frisk" scandal.  PIX11 News was the first to expose the racial profiling practice at the Macy's flagship store at Herald Square in October of 2013.

A few hours after Macy's terminated their relationship with Trump, an impromptu news conference was held by Latino leaders including Philip Ramos, the Deputy Majority Leader of the New York Assembly, where they not only expressed their gratitude to Macy's for taking action against Trump but also made it clear that their campaign of holding the developer and reality television star accountable is not over, "We are here calling for a nationwide boycott of those corporations who choose to invest in an individual who wants to take his racist feelings and translate them into public policy by running for president."

Meanwhile, a few blocks north of rally, in the shadows of the Mexican consulate in Midtown, Margarito Paez was cooking up tacos as he has for the last four years.  He shared with me that in 1996 he was inspired to come to the United States for one reason, "The American Dream."

While Paez applauds Macy's for ending their business relationship -- he admits that he'd have a different perspective if Trump came to his taco truck.  When asked if he would take his order?  Paez quickly remarked, "Yeah because I am not racist. I'm doing business."

On a separate note, Trump continued to show a rise in the polls.  A new CNN/ORC national poll shows that Trump along with GOP frontrunner Jeb Bush are the only two candidates garnering double-digit support among Republicans.