When should seniors turn over the car keys? 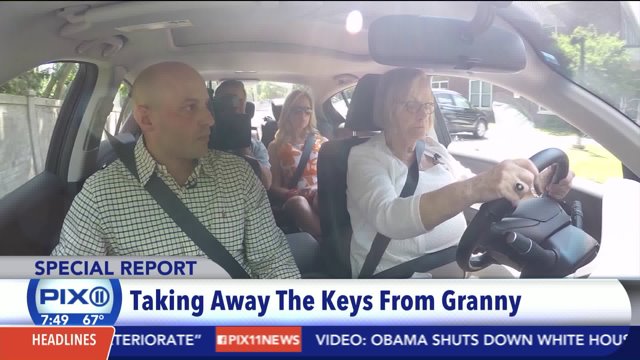 WHITE PLAINS, N.Y.-- It's road test time for Barbara Crowe, only this isn't her first rodeo. She's been at the wheel for some 50 years; and felt it was time for someone to put her to the test to see if she should still be driving.

"I want to make sure it's safe for me to drive, including myself," Crowe said.

And at 78, Barbara has good cause to be concerned, since older drivers have the highest fatal crash rates after teens. Nearly half the states in the country are weighing in on whether it's time to take the keys from Granny, and have begun restricting license renewals for senior drivers. It's all part of an effort to grapple with a growing problem that by 2030 more than 70 million Americans will be over 65.

Crowe noticed some bumps in the road with her memory lately, and her doctor suggested it was time for a driving evaluation, something the therapists at Burke Rehabilitation Hospital in White Plains have been doing for 20 years. A series of tests measure Crowe's memory and reaction times, then she takes a road test.

Testing like this can catch problems before they become disasters.

Anything from medication, which can make a driver drowsy or confused, the onset of Alzheimer's disease, physical limitations or just the effects of aging can all lead to unsafe driving. It's something Crowe has seen with her own friends, and struggle with.

"When you changed lanes without looking, I would have looked closer at that," Walling said.

If Crowe fails, the results go to her neurologist, who would notify the Department of Motor Vehicles, putting the brakes on driving.

But her results came out great and she got to keep her "keys to freedom."

"You drove well, you passed," Walling said to Crowe.

But Crowe needs to keep coming back--to make sure she stays on the road to safety.

What to do once you decide to take away the keys: http://www.nextavenue.org/after-elderly-parent-gives-keys-whats-next/

Understanding what happens to driving ability as we age: http://www.helpguide.org/articles/aging-well/age-and-driving-safety-tips.htm