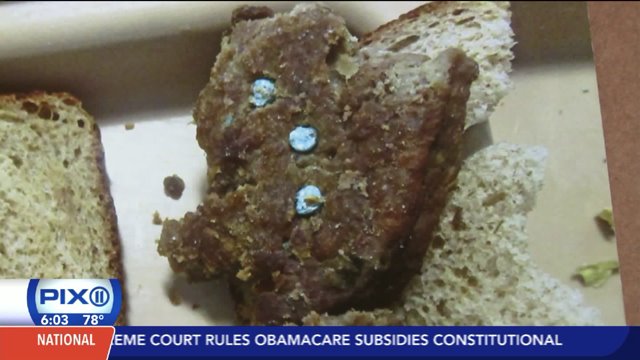 NEW YORK -- The blue pellets seen in pictures obtained exclusively by PIX11 News are pellets of rat poison hidden in food served to inmates at Rikers Island. What’s more alarming is the growing number of inmates that reportedly swallowed the poison.

One photograph shows the deadly ingredient was embedded in a meatloaf sandwich. Another photo revealed the pellets mixed in with cabbage and corn.

PIX11 News obtained these exclusive photos taken in March by a corrections officer at Rikers Island.

Attorney Joann Squillace represents the now 23 inmates suing the corrections department after they were sickened.

"One of the correction officers did see [rat poison] and was quite alarmed by what he saw and took pictures of," Squillace said.

That officer gave one of the sickened inmates a memory card with the pictures to be used as evidence. Lab results conducted by a firm Squillace hired confirmed the pellets are brodifocum.

But the corrections department won’t confirm those findings. They’ve been conducting their own investigation for nearly three months -- and so has PIX11 News.

The civil suit is massive, with more than 200 pages detailing the pain suffered by the inmates who ate the pellets. One inmate said he complained of "vomiting blood and body shakes," according to the complaint. It further alleges he was denied medical treatment.

PIX11 News has detailed a mountain of issues with patient care at Rikers.

In April, Alvin Nelson, whose family says he was refused care at Rikers, died from terminal cancer while in custody.

Rikers healthcare provider Corizon Health came under fire following a series of deaths related to inadequate medical care last year. The city is now ending Corizon’s contract at the end of the year.

As part of a settlement the city has agreed to appoint a federal monitor to oversee Rikers, install at least 7,800 new surveillance cameras and equip guards with body cameras.

"The mayor should find the courage to move our children off of Rikers immediately but ultimately shut down the entire plant," said Glenn Martin, founder of JustLeadershipUSA.

And though the reforms are underway, Correction is still struggling to curb violence at Rikers. On Monday, three inmates were slashed in gang attacks which lead to a full lock down of all the city operated jails.