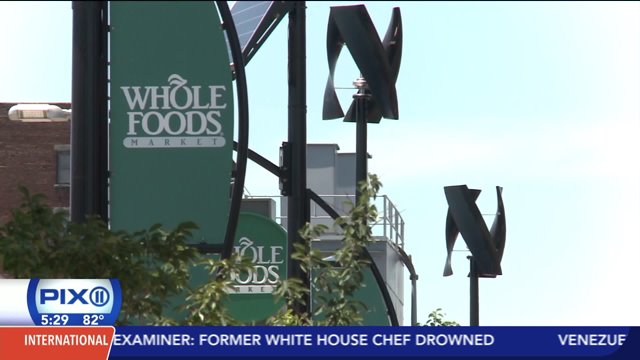 NEW YORK — If you already thought Whole Foods was expensive you might be shocked to find out you weren't even getting what you thought you were paying for.

That's according to an investigation by the Department of Consumer Affairs.  And it turns out this isn't the first time the high-end grocery chain has been accused of overcharging customers.

The Department of Consumer Affairs says it tested 80 different types of products including meat, dairy, and baked goods at New York City stores and found that every single product was mislabeled, leading to customers getting overcharged.

Naturally, Whole Foods regular customer Daonne Huff was disappointed to find out she may have been overpaying for groceries and lunch on a regular basis.

"It's just a bummer because this city's already so freaking expensive and I only have so much money to spend," Huff said.

According to consumer affairs, Whole Foods routinely overcharged customers by listing higher weights on pre-packaged goods.  The overcharges ranged from 80 cents on a package of pecan panko to almost $15 for a package of coconut shrimp.

"Those little pennies actually do make a difference, they do," said Huff.

Inspectors say the Whole Foods process of mislabeling products is the worst they've ever seen.

"As a large chain grocery store, Whole Foods has the money and resources to ensure greater accuracy and to correct what appears to be a widespread problem—the city’s shoppers deserve to be correctly charged,” said Commissioner Julie Menin.

The agency says Whole Foods could face thousands of potential violations with each fine up to $1,700.

But this isn't the first time Whole Foods has come under fire for pricing problems.

In 2012 , the company paid almost $800,000 in penalties following a consumer protection case in California.

But a spokesperson for Whole Foods called the New York allegations "overreaching" and says the company will defend itself against the claims.

"Despite our requests to the DCA, they have not provided evidence to back up their demands nor have they requested any additional information from us, but instead have taken this to the media to coerce us. Our customers are our number one stakeholder and we highly value their trust in us,” said Michael Sinatra.

However, outside the Brooklyn store Wednesday, both loyal and occasional shoppers told us they'll reconsider their shopping habits in light of the investigation.

"In these times and ages you have to watch every dime you spend, so it's like really now I'm going to start checking the prices and probably cutting back on coming to Whole Foods," Suzzette Becca said.

"It makes me feel terrible, but I don't shop there any more.  I learned my lesson quick," said Mario Lebano.

The Department of Consumer Affairs is asking anyone who thinks they may have been overcharged at Whole Foods, or any other supermarket to file a complaint with 311.