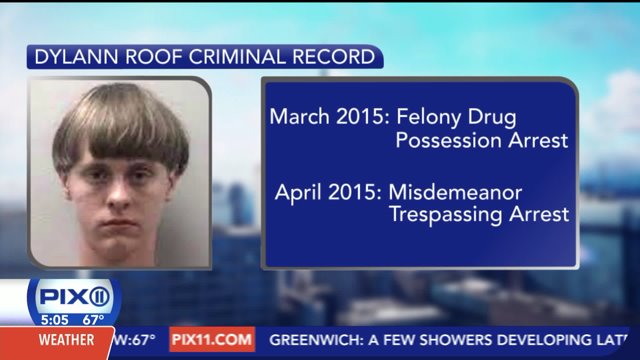 He targeted black churchgoers based on the color of their skin, officials said, but who is Dylann Roof?

SHELBY - Suspected Charleston church shooter Dylann Roof was hungry after more than 15 hours on the run, and after his arrest officers made a stop before jail -- at Burger King.

After allegedly massacring nine parishioners at Emanuel AME Church in Charleston, South Carolina, a tip from a driver trailing Roof through North Carolina led to his arrest.

"I'm Dylann Roof," he told the five arresting officers, guns drawn, as he sat behind the wheel of a black Hyundai sedan sporting a Confederate flag license plate.  Inside, officers found a .45-caliber handgun.

Roof told officers that he hadn't eaten since he bought chips and a water at a gas station in Charlotte, and complained that he was hungry.  Police bought him food from a nearby Burger King, the paper reported, likely to avoid any future litigation alleging inhumane treatment or rights violations.

PIX11 News has reached out to the Shelby Police Department, officials have not yet responded.

After eating, Roof was transported to a Charleston jail.  While there, he told officers he was headed to Nashville because he had "never been there before."

Last week, a website featuring a racist manifesto and 60 photos has become part of the investigation into Dylann Roof, who has been charged in the slaying of nine people at Charleston's Emanuel African Methodist Episcopal Church.

The 2,000-word text explains the writer's philosophy of white superiority, saying the Trayvon Martin case "truly awakened me" and that "I chose Charleston because it is most historic city in my state, and at one time had the highest ratio of blacks to Whites in the country."

Motive has become the biggest question as state and federal investigators work on the case -- and statements and photos on the website match what investigators have determined so far.

On Friday, Roof was charged with nine counts of murder and one count of weapons possession.