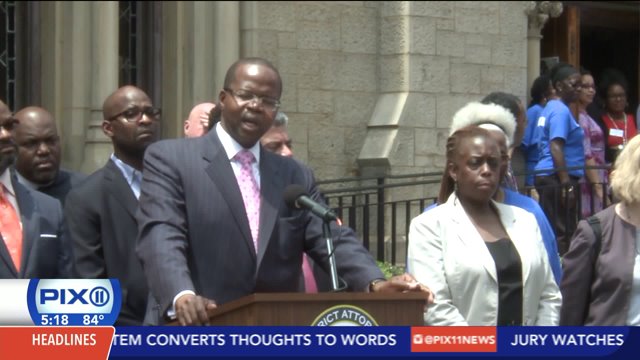 BROOKLYN - Right now one in seven New Yorkers have a warrant out for their arrest, but Brooklyn District Attorney Ken Thompson is trying to help prevent minor matters from spiraling out of control with an amnesty program taking place in Brooklyn this weekend.

Almost 1.2 million warrants are outstanding in the 5 boroughs.  About a quarter of them are right here in Brooklyn.  Many times it's the result of a missed court appearance for a petty crime like littering or being in the park after dark.  Which is why District Attorney Ken Thompson wanted to create the "Begin Again" program, to give minor crime offenders a clean slate.

"Someone has got to deal with the staggering number of outstanding warrants and we as a community have decided that it will be us," Thompson said.

By noon Friday, more than 200 people had taken advantage of the "Begin Again" program at Emmanuel Baptist Church in Clinton Hill.

The program, which runs through Saturday, allows minor offenders who have a warrant out for their arrest after failing to appear in court a chance to wipe the slate clean.

"We want you to have a chance to fulfill your potential and not be afraid of being handcuffed and brought to central booking and being kept there for 24 hours for a minor offense," he said, crimes like riding your bike on the sidewalk, littering, and having your dog off the leash.

Sidney Selby says he received a ticket for public urination because he takes water pills and simply couldn't hold it in any more.  When he tried to relieve himself between two cars an officer issued him a summons.  So he was thrilled to learn about the program.

"I was happy as a pig in slop," Shelby said.  "I said let me get over there and get this matter taken care of and that's why I came here today."

David Barnes got a ticket for having an open container in public when he was celebrating a friends birthday in Williamsburg.

"I knew that I got a ticket and I wasn't really sure exactly how to handle it.  And I really didn't want to go into the courthouse myself and then possibly be apprehended," Barnes said.  "So once I heard about this I knew I had to jump on it and it was very very useful."

Jerome Lincoln, from Bed-Stuy, had a warrant for his arrest after he missed a court appearance for being in the park after dark.

"It's a burden when it comes down to trying to find employment or if you have any other legal matters that it might effect," Lincoln said.

All of these matters and dozens more like them were cleared up in just a few minutes Friday.

But the District Attorney and those who showed up in support say programs like this are not an excuse to break the law.

"This is not saying we are soft on crime.  But a young man who rides a bike on the sidewalk at 18 should not be prevented from getting a job at 21 because of an arrest warrant that he forgot to pay the summons," Thompson said.

Which is why those who participated say anyone in a similar situation should take advantage of the amnesty program while they can.

Now to help prevent people from ending up with warrants for their arrest in the future, D.A. Thompson says he wants to change the design of the ticket to make it clear and obvious when a person has to appear in court.  He also said the system should take some role in reminding low level offenders about their court dates.

Thompson says those who refuse to go to court should still be punished, but those who can't make it on a given day because of a work or family obligations should not be treated like felons.  The Begin Again Program will host another amnesty day tomorrow from 9 a.m. to 3 p.m. at Emmanuel Baptist Church.