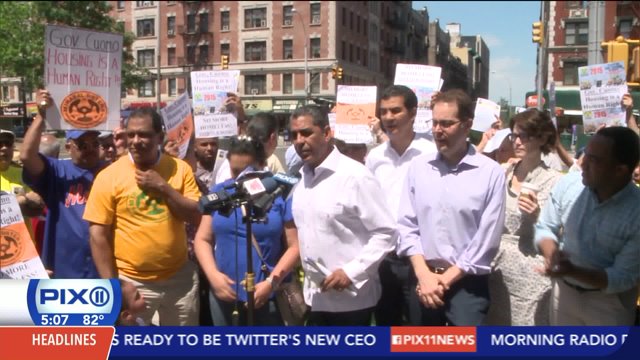 With rent laws set to expire tomorrow, many tenants are scared their rents may skyrocket.

MANHATTAN -- Tenants, activists and other supporters held a protest outside Gov. Cuomo's office on Sunday.

Tenants, members from Alliance from Tenant Power, Real Rent Reform, Clergy members and elected officials are campaigning to support stronger rent laws that are currently due to expire at midnight on Monday.

Earlier today Cuomo's office put out a press release that says the following:

"On Friday night, the Senate proposed an 8-year extender to New York City’s rent laws. The law differs from my proposal in a number of significant ways which makes it unacceptable because it does not include the necessary improvements on the existing law, its poses new hurdles for tenants and it reduces tenant protections. However, the bill is relevant and noteworthy in one way. The State Senate has offered an 8-year extension of the current rent laws as opposed to letting them expire.

"As I have said all along and repeated in a letter to New York City landlords, I will not allow the Legislature to leave town until the rent laws are resolved and at the end of the day the rent laws will be in place so landlords and real estate speculators should not seek to exploit any apparent lack of clarity in New York City’s rent laws. Any such speculation would be futile and possibly actionable as tenant harassment. The only question now is what improvements the Assembly and Senate can agree on."