As deadline ticks away, 2 million left wondering what happens to their rent 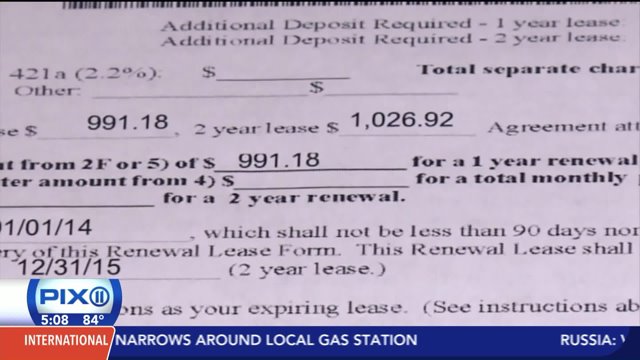 The state`s rental regulations will expire on Monday, causing rents to rise for 2 million people in the area.

CROWN HEIGHTS - It's a situation that's left two million people not knowing how high their rent may go, at best, or facing the possibility of losing their homes, at worst.  But Albany's inability to renew rent regulation legislation has plenty of residents frustrated and concerned.

"We're just making it month by month, pinching it day by day," said Natasha Creese from the living room of her rent regulated apartment on Schenectady Street.  "We don't expect much.  What we have we're living with."

Creese helped her now-deceased mother help raise all of her younger brothers and sisters in the three bedroom apartment which she still calls home.

"I've been living here for 25 years," she told PIX11 News.  "When my mother moved here, it was really really rough.  It was called Dodge City."  She was referring to the frequent shootings in Crown Heights in the 1990's, when New York City saw record high numbers of murders and shootings.

Creese is currently paying $991 per month in rent.  Her landlord, however, is now asking for considerably more.

"He just wants me to pay $2139" per month, she told PIX11 News. She's part of a tenant association in a legal battle with landlord Renaissance Realty over rent levels.

For its part, Renaissance Realty can legally demand the increase, if Creese cannot prove in writing that her mother's first lease guaranteed, as long as the family lived here, a preferential rent.  It is the lower rent she's currently paying, which housing advocates she's working with say would be protected if rent regulation laws are passed.

Landlords often charge lower, preferential rents to attract tenants to troubled buildings or neighborhoods, which Creese's building and neighborhood were back in the 1990s.  That's not the case now, thanks in part to loyal tenants, like Creese and her neighbors, who are now being asked to pay so called legal, or close to market-rate rent.

"You're just saying, 'Thank you, we don't need your service no more.  We can push you guys out,'" Creese said about the rent change after so many years as a tenant.

Her neighbor Jorge West has lived in her building for 18 years.  "I really don't think it's fair," West said, "because we are the one(s) that actually built this building. [The landlord] wants to misplace us now."

West is also paying a preferential rent.  The tenants of his and Creese's building, along with a similarly sized building across the street, are full of tenants eager for lawmakers in Albany to decide on rent regulation that might keep their landlord, Renaissance Realty, and thousands of others landlords, from raising their preferential rent to the much higher rate.

"The landlord wanted to increase my rent almost $500 dollars" from about $1300, West said.

Renaissance Realty did not respond to any calls made by PIX11 News.

Creese, though, joined on Friday with a few dozen other tenants and housing advocates on the steps of City Hall.  It was a rally with the city's public advocate, Letitia James, to highlight groups that work with tenants to try and ensure their rent is affordable.

Creese and West have worked with the Urban Homesteading Assistance Board and other advocacy groups to help keep their rents affordable, for now.

"Disgust," Letitia James said to PIX11 News, "given the sense of paralysis in Albany."

Rent regulation is not expected to pass by Monday's deadline.  Still, lawmakers say that tenants should be able to keep the terms of their current leases until legislation is passed.  That action may take months.