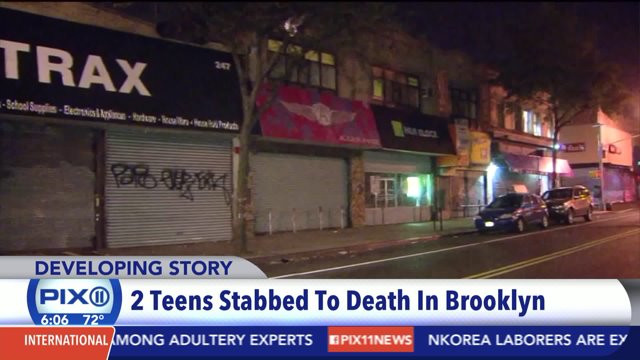 CROWN HEIGHTS, Brooklyn -- It was a deadly night in Brooklyn as police began their new push to fight rising crime.

Two teenagers were stabbed to death Wednesday at scenes less than a block apart from one another, police said.

This is John Garrett, 17 year old Brooklyn teen stabbed to death on his way home. Was attending automotive school. pic.twitter.com/PBQD6TQJXL

Police did not release a motive for the slayings, but did say they were confident the two stabbings were not related.

The slayings happened in a precincts that is not benefiting from more officers on the street as part of the department's "Summer All-Out" program , meant to combat a rise in shootings and homicides.

"What were trying to do is adjust accordingly and quickly as we see new and emerging trends," Commissioner William Bratton said as he rolled out the initiative. "It worked last year. We fully anticipate it will work this year."

NYPD Chief James O'Neill said "one of the best things" about the program is that officers are in cars, they're on foot patrol.

Those boots on the ground -- 330 veteran officers starting who started in their new posts Wednesday night -- used to be working desk jobs. They have been brushing up on their street skills to work about 90 days out on the beat in 11 high-crime precincts, officials said.

NYPD is pushing a new anti-gang initiative in Brooklyn. It's still unclear whether these latest killings had anything to do with gang violence. No arrests have been made, police said.