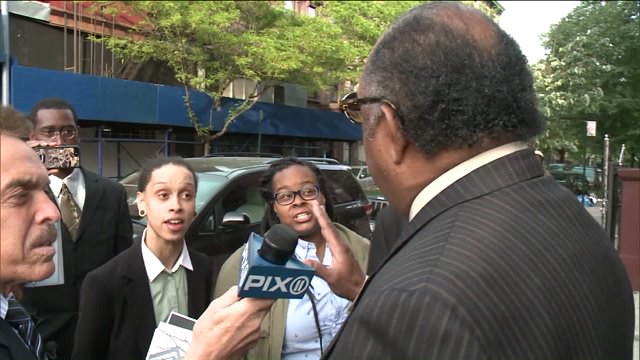 Neighbors confronted a long-controversial Harlem pastor in the street, but he didn`t apologize for his views. 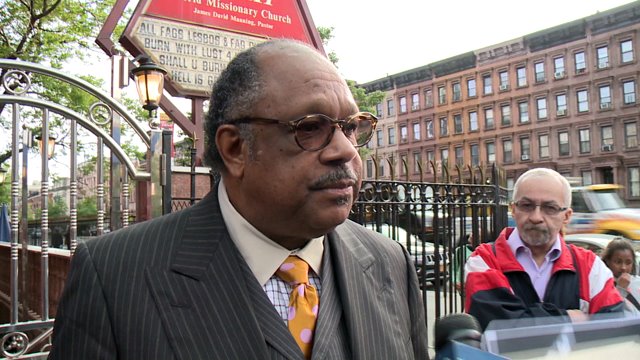 HARLEM — Controversial  Pastor James David Manning is drawing a lot of attention to his Atlah World Missionary Church on 123rd Street and Lenox Avenue in Harlem.  Pastor Manning is using the billboard outside his church to post what some say are hate filled anti-gay messages.

One sign reads “all churches and members that support h***s cursed be thou with cancer, HIV, syphilis, stroke, and madness.” Another says “Jesus would stone h***s”.

Neighbor and lesbian Sharifa Ferryman says the offensive messages are hard to avoid. “I ended up walking across the street  causes it’s so hurtful to hold my wife’s hand and these words every time I pass by.”

Pastor Manning , in a confrontation outside the church recorded by PIX11, told Ferryman: “You are going to hell for your insidious and wicked lifestyle. It’s a disgrace that you would stand here and confess that you have a relationship with another woman. It’s a disgrace before God.

But other residents told Pastor Manning that the messages he posts are a disgrace. “This is clearly hate speech. You’re inciting violence,” said one Harlem resident. Manning told her “this is still America and we have freedom speech."

Pastor Manning reportedly  became a devout Christian while in prison as a young man.  He admits to having had homosexual urgings in the past but says he did not carry out those urgings.  “I believe that sodomites are sexually a diseased people,” he said. One of his signs says “h*** demons in Harlem Restaurants are possibly  transmitting  sexual disease.”

Manning is also anti-Obama. “Jesus released cancer on Obama," says one sign. He is also against the gentrification of Harlem. One of his signs says “Many of the h***s moving in Harlem looking for some black meat. “

The pastor’s billboard messages have a lot of residents upset. While PIX11 was interviewing Manning, a crowd gathered, many voicing their objections. “You cannot put things up like that,” said one woman, “you need to take that down.”  The pastor replied, “I’m not gonna do that.

“You have a moral responsibility to represent our community in an upstanding way. This right here is disgusting, “ said  one man, pointing at the billboard. One neighbor said: “Sir, I have two small children and I have to walk past this crap every day.” Pastor Manning replied “I pray they see it every day.”